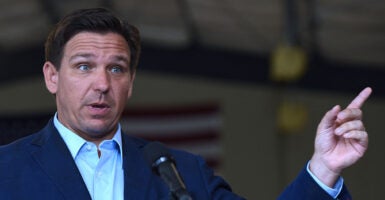 On Sunday night, “60 Minutes” aired an edited exchange with DeSantis implying that the Republican governor favored grocery store chain Publix with coronavirus vaccines because Publix had donated to his campaign.

The Daily Caller put together a video that includes the edited exchange from the CBS News program as well as the full answer given by DeSantis.

In an interview Monday night with Tucker Carlson of Fox News, DeSantis said the “60 Minutes” team “selectively edited the background; they tried to act like there was a conspiracy with Publix.”

They don’t believe in facts. It was a political narrative. It was done with malicious intent and a reckless disregard for the truth. … They were in Florida for three months, ’60 Minutes,’ trying to dredge up any dirt they could use to smear me.

“The reporting was not just based on bad information—it was intentionally false,” Kerner said.

We also discussed our own local plans to expand mass vaccinations centers throughout the county, [on] which the governor has been incredibly supportive.

“@60Minutes I said this before and I’ll say it again,” Moskowitz tweeted to the CBS News program. “@Publix was recommended by [Florida Division of Emergency Management] and [Florida Department of Health] as the other pharmacies were not ready to start. Period! Full Stop! No one from the Governor[’]s office suggested Publix. It’s just absolute malarkey.”

Publix put out its own statement Monday.

The grocery chain tweeted that “the irresponsible suggestion that there was a connection between campaign contributions made to Governor DeSantis and our willingness to join other pharmacies in support of the state’s vaccine distribution efforts is absolutely false and offensive.”

In a statement reported by CNN, a “60 Minutes” spokesperson said: “As we always do for clarity, ‘60 Minutes’ used the portion of the governor’s over 2-minute response that directly addressed the question from the correspondent.”

Here is the exchange between Sharyn Alfonsi, the “60 Minutes” reporter, and DeSantis, according to The Daily Wire, which says the words in bold were edited out by CBS News.

Alfonsi: Publix, as you know, donated $100,000 to your campaign, and then you rewarded them with the exclusive rights to distribute the vaccination in Palm Beach—

DeSantis: So, first of all, that—what you’re saying is wrong. That’s—

Alfonsi: How is that not pay-to-play?

As we got into January, we wanted to expand the distribution points. So yes, you had the counties, you had some drive-thru sites, you had hospitals that were doing a lot, but we wanted to get it into communities more. So we reached out to other retail pharmacies—Publix, Walmart—obviously, CVS and Walgreens had to finish that mission. And we said, “We’re going to use you as soon as you’re done with that.”

For Publix, they were the first one to raise their hand, say they were ready to go. And you know what, we did it on a trial basis. I had three counties. I actually showed up that weekend and talked to seniors across four different Publix: How was the experience? Is this good? Should you think this is a way to go? And it was 100% positive. So we expanded it, and then folks liked it.

And I can tell you, if you look at a place like Palm Beach County, they were kind of struggling at first in terms of the senior numbers.

I went, I met with the county mayor. I met with the administrator. I met with all the folks in Palm Beach County, and I said, “Here’s some of the options: We can do more drive-thru sites, we can give more to hospitals, we can do the Publix, we can do this.” They calculated that 90% of their seniors live within a mile and a half of a Publix. And they said, “We think that would be the easiest thing for our residents.”

So, we did that, and what ended up happening was, you had 65 Publix in Palm Beach. Palm Beach is one of the biggest counties, one of the most elderly counties; we’ve done almost 75% of the seniors in Palm Beach, and the reason is because you have the strong retail footprint.

So our way has been multifaceted. It has worked. And we’re also now very much expanding CVS and Walgreens, now that they’ve completed the long-term care mission.

Alfonsi: The criticism is that it’s pay-to-play, Governor.

DeSantis: And, so, it’s clearly not.

Alfonsi: Isn’t there the nearest Publix—