5 Top Iranian Officials You Should Know 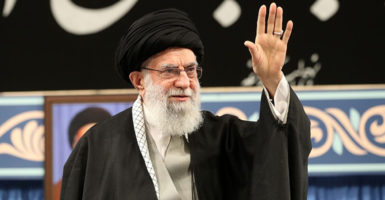 Tensions between the United States and Iran seem to be deescalating again, but the countries clearly are still at loggerheads.

Much media attention has been focused in recent days on President Donald Trump and his national security team, including Defense Secretary Mark Esper and Secretary of State Mike Pompeo.

Trump ordered the U.S. drone strike in Iraq early Friday that killed Iranian Maj. Gen. Qassim Suleimani, 62, whom some commentators have called the second most powerful official in Iran.

In the wake of Suleimani’s death, here are five of the key figures in Iran’s Islamist regime to know about going forward.

Khamenei has held the top spot since 1989 and the death of Iran’s first supreme leader, Ayatollah Ruhollah Khomeini, challenging the policies of five American presidents.

The United States imposed sanctions on Khamenei and his associates last summer after Iran shot down a U.S. drone.

The second supreme leader since the Iranian Revolution in 1979 that overthrew Shah Mohammad Reza Pahlavi, he was Iran’s president from 1981 to 1989.

Khamenei, 80,  had brief stints as minister of defense and supervisor of the Iranian Revolutionary Guard Corps before becoming the nation’s third president in the early, chaotic years after the revolution.

President Hassan Rouhani was part of the revolutionary movement in the 1970s against the shah. He was a member of Iran’s parliament for about two decades.

Rouhani, 71, was elected president first in 2013 and then reelected in 2017. He has posed as a moderate, but has presided over much of the violence in Iran.

The president of the country is largely a figurehead role, while the religious government—the mullahs—make the decisions.

Rouhani served as secretary of the Supreme National Security Council during the presidencies of Akbar Hashemi Rafsanjani and Mohammad Khatami.

He resigned as the government of President Mahmoud Ahmadinejad took power from August 2005 to August 2013. Rouhani would become Ahmadinejad’s successor that month.

Announcing his candidacy for president in March 2013, Rouhani campaigned as a moderate reformer with the goal of having a more peaceful relationship with the West.

His government moved forward with the 2015 Iran nuclear deal, led by the Obama administration and joined by European allies, Russia, and China. The Trump administration pulled the U.S. out of the agreement in 2017.

Despite his reform image, Rouhani presided over Iran’s increased aggression in the region carried out by the Islamic Revolutionary Guard Corps.

Foreign Minister Mohammad Javad Zarif is his nation’s equivalent of the U.S. secretary of state, conducting  foreign policy and diplomacy for Iran. He was appointed to the job in 2013.

Zarif, 60, negotiated the nuclear agreement with the United States, Britain, France, Germany, China, and Russia that also known as the Joint Comprehensive Plan of Action.

He resigned earlier this year, but Rouhini didn’t accept his resignation.

He was a career diplomat before taking Iran’s top diplomatic role, holding various positions including representative to the United Nations.

Zarif not only speaks English but can do so with an American accent, The Brookings Institute has noted.

The Revolutionary Guard, separate from the nation’s military, has the mission of protecting the mullahs and spreading the Islamic revolution. It has 100,000 soldiers and sets up proxy militias and other organizations.

Despite the similar name, Salami is not to be confused with Suleimani, who headed the Revolutionary Guard’s Quds Force, which conducts terrorist and spying operations outside Iran.

During the elaborate Suleimani funeral services, Salami said Iran would exact “the kind of revenge that causes remorse” on the United States.

Brig. Gen. Amir Hatami is Iran’s minister of defense, the country’s equivalent of a defense secretary.

Hatami, 54, had been a Revolutionary Guard officer since 1989 and previously was an Army officer assigned to international relations.

>>> Related: Questions Mount as Ukrainian Airliner Crashes in Iran, Killing All Onboard