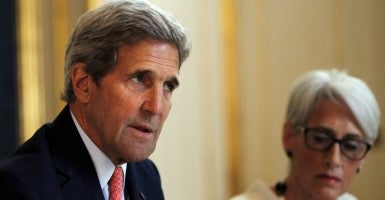 Negotiations between Iran and six world powers over Tehran’s nuclear program have been extended into July as diplomats failed to bridge differences on key components of the talks.

Today had been the self-imposed deadline for the United States and its negotiating partners to complete a final agreement to contain Iran’s nuclear program in exchange for sanctions relief, but the parties now have until July 7 to cinch a deal.

For the U.S., if a final agreement is not submitted to Congress by July 9, lawmakers would have 60 days to review the deal—a longer window than the 30-day review period required if a deal was struck before then.

The Obama administration has said they want to avoid a lengthy congressional delay, which government officials fear will open a window for the deal to crumble.

“The U.S. negotiators will have an extremely difficult task in extracting enough concessions from Iran to cobble together an acceptable nuclear agreement by July 7,” said James Phillips, The Heritage Foundation’s senior research fellow for Middle Eastern affairs.

Despite predictions from all sides that negotiations would extend beyond Tuesday’s original deadline, Iran’s foreign minister, Mohammad Javad Zarif, returned to Vienna early today from Tehran.

“I am here to get a final deal, and I think we can,” Zarif told reporters early in the day.

He met independently with U.S. Secretary of State John Kerry before widening negotiations with the foreign ministers of France, Germany, Britain, Russia and China.

The deal seeks to restrict Iran’s nuclear program in exchange for lifted sanctions, but fundamental proposals remain in dispute. Iran is demanding sanctions to be immediately lifted upon the deal’s passage, but the West remains adamant in pushing for gradual removal.

Western powers are also pushing for U.N. sanctions to be automatically reinstated if Iran violates the deal, but Russia and China refuse to restrict their veto powers on the U.N. Security Council, making automatic sanctions less likely.

Khamenei repeated that Tehran would reject any deal restricting Iran’s research and development of advanced centrifuges.

He said he also would not allow international inspection of military bases.

Phillips said prospects of a final deal would be killed if Iran adheres to the Ayatollah’s demands.

“To complete a deal, Iran must allow robust inspections, including facilities at military bases; greatly reduce its store of enriched uranium; agree to dismantle its Arak heavy water reactor, which would be a plutonium bomb factory; agree to phased sanctions relief linked to verification of Iranian compliance; and agree to restrictions on numbers and types of centrifuge,” Phillips said.

“I think there is a very good chance that the negotiations will miss yet another self-imposed deadline on July 7.”