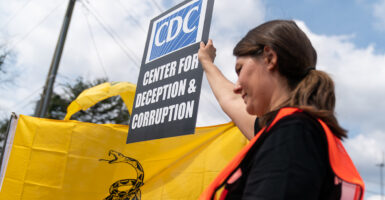 A Centers for Disease Control and Prevention poster says wearing cloth masks reduces the odds of getting COVID-19 by 56%. Except the study the poster is based on says no, it doesn’t. Pictured: People protest against masks and vaccine passports outside the CDC in Atlanta in 2021. (Photo: Elijah Nouvelage/Getty Images)

Coming soon to your Twitter feed: another Centers for Disease Control and Prevention poster on the virtues of mask-wearing.

“People who reported always wearing a mask in indoor public settings were less likely to test positive for COVID-19 than people who didn’t,*” the poster announces.

Astute readers will notice the asterisk (*) in the poster’s title.

The fine print at the very bottom of the poster explains: “*Not statistically significant.”

That means the study on which it based the poster didn’t establish the findings depicted in the poster.

But that didn’t stop the CDC from publishing the spiffy graphic, which proclaims that “wearing a mask lowered the odds of testing positive.” 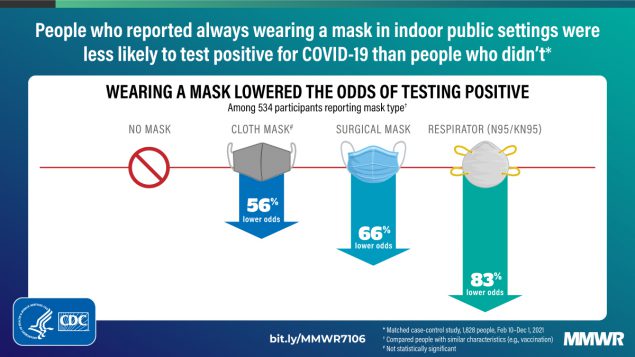 The made-for-Twitter visual mischaracterizes the findings of the Feb. 4 study. That study was so poorly designed that the confidence intervals—the range of possible results, similar to the “+/-” in public opinion polls—were large enough to render its findings meaningless.

So, while the poster says that cloth masks reduced the risk of testing positive for COVID-19 by 56%, the study itself reports that wearing a cloth mask may make you 17% more likely to test positive than wearing no mask at all. That’s quite a +/- range.

Nor does the study present a conclusive case for the value of wearing any sort of mask.

It is based on a survey conducted between February and December 2021. Californians who had tested positive for COVID-19 in the previous 48 hours were asked to take the survey. Nearly 87% refused. That left a self-selected sample of 652 people with positive tests.

They also assembled a “control” group of people who had tested negative within the past 48 hours. Nearly 92% declined to participate. They matched the self-selected 1,152 negative testers with the 652 positive testers for age, sex, race, income, and geography.

But not for vaccination status.

The study reports that 78% of people who tested positive were unvaccinated or incompletely vaccinated, compared with 57% of those who tested negative.

The study designers overlooked other potentially significant differences between the two groups. Positive testers were nearly five times more likely to be symptomatic than negative testers (78% to 17%).

Negative testers were more than three times more likely than positive testers to get swabbed as part of job or school-based screenings, because they planned to travel, or because they needed a test before undergoing a medical procedure (70% to 22%).

People reporting COVID-19 symptoms are more likely to test positive than asymptomatic people getting routine screenings, regardless of their masking habits.

The study’s authors ignored all that and questioned the two self-selected groups about how frequently they’d worn masks while indoors over the previous two weeks and what types of masks they wore.

They found that 60% of people with COVID-19 reported wearing them all the time, compared with 70% of those who tested negative. That result is contaminated by the study’s self-selection and the differences between the two groups in vaccination status and reasons for testing (diagnosis vs. screening).

Nevertheless, the authors reported that wearing masks all the time reduces the risk of testing positive for COVID-19 by at least 56%.

But once again, there’s the problem of confidence intervals. The study found that wearing a mask some of the time might make you 46% more likely to test positive than wearing no mask at all. Wearing it most of the time could increase your risk by 5%. And the confidence intervals for those who report wearing masks some, most, or all the time overlap, rendering statistically valid inferences impossible.

It gets worse. Only 543 people agreed to answer questions about the type of mask they wore. Of those, 316 (58%) reported known or suspected contact with someone with COVID-19. The authors kept these people in the study anyway because excluding them would have made their sample size so small as to embarrass even the CDC.

But they don’t disclose how many of them tested positive. We already know that those with positive results were more likely to be unvaccinated and symptomatic. If they also were more likely to have had contact with an infected person, that would be yet another glaring flaw in a study the government should never have published.

At least they attached an asterisk to their poster, acknowledging that the entire poster was based on findings that weren’t even statistically significant. Perhaps they hope that no one will actually read the fine print.