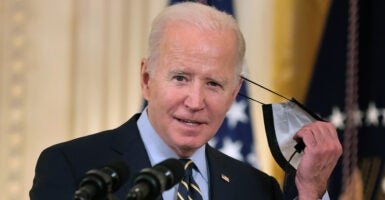 This was a lie.

It was a lie because nobody can shut down the virus.

Government does not have the power to end disease, as a general matter. When it comes to a wildly transmissible coronavirus specifically, no government can end the virus. Even the sainted Dr. Anthony Fauci has admitted as much: “we’re never going to eradicate this … elimination may be too aspirational.”

Which means that government should not aim for elimination; it can aim for some level of control. That control must be balanced with countervailing concerns, ranging from suppression of economic freedom to the effects of social isolation. This means that the lowest-cost intervention was incentivization and distribution of vaccines—a service performed by the Trump administration. The worst form of control would be overbroad, coercive restrictions that fail to achieve their objectives.

And yet it is precisely those forms of control now being sought by Democratic mayors and governors, as well as the Biden administration. To make such tactics even more puzzling, Democrats are pursuing such restrictions in the face of an extraordinarily transmissible variant—some 70 times more transmissible than Delta—that has far lower death rates than prior variants.

In practice, mask mandates have not achieved their desired effect, as omicron spikes in places like New York City demonstrate. Mass testing will not control the spread of omicron, because asymptomatic people will not test—and if we quarantine millions of asymptomatic and mildly symptomatic people, we will shut down the economy and our school system. And vaccination mandates will simply result in supply chain shortages, including within our health care system, as well as ugly social divisions.

Because the big-government lie must be maintained. It is an article of faith. And faith requires reason-free sacrifice—it requires skin in the game, demonstration of devotion. To pursue rational policy would evidence no fealty to the notion of government-as-protective-god. To pursue irrational policy and then demand obeisance–this is the mark of the faithful. And if you are not faithful, you are a heretic.

And so regulatory genuflection becomes a test of virtue. Effectuating strict regulations is a sign of moral strength, of belief in the myth of government as catholicon. Pushing back against those restrictions is a sign of heresy.

But that will only happen when Americans abandon the cultic worship of government and return to reality. And Biden and Democrats will fight such blasphemy with every weapon in their arsenal.