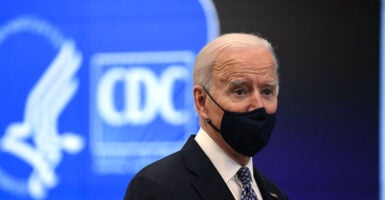 How reliable are government declarations that mask mandates prevent the spread of the coronavirus?

Our recent experience with researchers from the U.S. Centers for Disease Control and Prevention has left us less than confident that the public should trust the CDC’s published research, much less any pronouncements based on that research.

Our problem involves a paper that the CDC published in November. The paper studies mask mandates in Kansas because, in July, Gov. Laura Kelly issued an optional mask mandate. Counties could decide whether to enforce the mandate or opt out.

Many counties did opt out, but the larger metropolitan areas did not. Overall, 24 counties implemented a mask mandate and 81 opted out.

The CDC paper argues that the mandates were a success. In particular, the paper claims that “the increasing trend in COVID-19 incidence reversed” in the Kansas counties with mask mandates.

We noticed, however, that this conclusion is incorrect. As our paper shows, the trend did not reverse in those counties. Moreover, the growth in reported case incidence (and mortality) was, overall, virtually indistinguishable in counties with and without mask mandates.

It turns out that the CDC paper made an incorrect assertion because the authors used data that was later updated. As statistical studies go, this sort of mistake is surely forgivable.

However, the CDC’s refusal to publicly acknowledge this incorrect assertion—we corresponded with the main author, as well as several editors and an associate director for policy at the CDC—is inexcusable. There simply is no room in legitimate scientific study for refusal to admit mistakes.

Our experience, sadly, is not unique. Even in those rare instances where government public health officials yield to scientific evidence and revise their recommendations, they seldom admit error.

On March 19, for example, the CDC abruptly changed its guidance for classrooms, saying that desks need only be separated by 3 feet, rather than 6. The agency’s new “science brief” on the subject does not cite a single classroom-based study that found desks should be kept 6 feet apart, but lists numerous studies supporting the 1-meter (3.3 feet) standard long favored by the World Health Organization and the American Academy of Pediatrics.

The agency brief did not cite a preprint study posted earlier in March that found, based on a review of numerous studies of classroom transmission, “no significant difference in student or staff case rates between schools with ?3 versus ?6 feet of distancing with a large sample size.”

The CDC changed its policy, but without acknowledging the damage its earlier recommendation inflicted on children, much less admitting error.

Unfortunately, throughout the pandemic, scientific facts have meant little. While many facts were unknown when the disease first took hold in the United States, a great deal of the evidence was quite clear by May.

Many facts are even clearer now.

For instance, most people who contract the coronavirus do recover, with the elderly and the sick, by far, the most vulnerable. Even ignoring the fact that many asymptomatic cases have gone unreported, the survival rate for anyone between ages 40 and 49—without regard to preexisting health problems—is in the neighborhood of 99.7%. It’s even higher for younger people.

We also now know that lockdowns didn’t deliver on their promised health benefits. States that adhered to stringent lockdown strategies, like California and New York, report similar numbers of cases on a population-adjusted basis as those that imposed fewer restrictions, like Florida and Texas.

Indeed, California’s overall rate of what epidemiologists call “excess mortality”—the total number of deaths in a given period of time compared to historic trend—is well above the national average and considerably higher than Florida’s, particularly among young adults.

The coronavirus retrospective must include a thorough evaluation of why, even after these facts were evident, so many government officials stuck to indiscriminate lockdown and mitigation policies. This kind of assessment will not be possible, though, without honest, legitimate scientific study.

A recent op-ed written by Martin Kulldorff and Jay Bhattacharya does not bode well for such scientific rigor. It details how five prominent scientists “faced the modern-day inquisition” over their coronavirus-related work, and it is difficult to judge which of these cases is the most disheartening.

It is rather sad, for example, that the Journal of the American Medical Association published an opinion piece attacking Dr. Scott Atlas without engaging in his ideas.

Still, it’s difficult to judge if that case is worse than the one of epidemiologist Carl Heneghan, the head of the University of Oxford’s Centre for Evidence-Based Medicine.

U.K. officials attacked Heneghan after he publicized serious errors in official U.K. coronavirus statistics, and an article in The Guardian implied that Heneghan is part of “the anti-science lobby” after he pointed out that the only published randomized study on mask-wearing suggests that masks may not be effective in protecting against a coronavirus infection.

Government officials and the American people depend on legitimate scientific study, and they have shown extraordinary deference to the CDC throughout the past year. This deference rests on the presumption that the agency’s recommendations to shutter businesses, close schools, restrict public worship, and enforce mask mandates have a solid basis in science.

That confidence, in many instances, appears to have been misplaced. As the public health emergency abates, Congress, the media, and the American public should heavily scrutinize the agency’s procedures and practices.