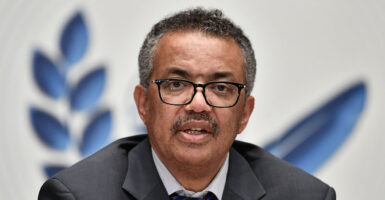 The State Department issued a joint statement with 13 other democracies expressing concerns over the World Health Organization’s study with China investigating the origins of the COVID-19 pandemic.

“Together, we support a transparent and independent analysis and evaluation, free from undue influence, of the origins of the COVID-19 pandemic,” the State Department’s statement read. “In this regard, we join in expressing shared concerns regarding the recent WHO-convened study in China.”

The WHO’s joint report with China on the origins of the pandemic, released Tuesday, did not offer a definitive answer of where the virus originated, but largely glossed over the theory that it could have entered the human population via an escape from the Wuhan Institute of Virology.

The WHO lacked the authority to conduct an independent investigation during its four-week investigation in Wuhan in early 2021. China was granted veto rights over which scientists could participate in the investigation and imposed strict limitations on the researchers during their visit, according to The Wall Street Journal.

“We note the findings and recommendations, including the need for further studies of animals to find the means of introduction into humans, and urge momentum for expert-driven phase 2 studies,” the State Department statement read. “Going forward, there must now be a renewed commitment by WHO and all member states to access, transparency, and timeliness.”

The statement stressed that the U.S. fully supports the WHO’s efforts to determine how the pandemic started and will continue to collaborate with the organization to “inspire public confidence and trust in the world’s ability to detect, prepare for, and respond to future outbreaks.”

“In a serious outbreak of an unknown pathogen with pandemic potential, a rapid, independent, expert-led, and unimpeded evaluation of the origins is critical to better prepare our people, our public health institutions, our industries, and our governments to respond successfully to such an outbreak and prevent future pandemics,” the statement added.

China “has not been transparent. They have not provided underlying data. That certainly doesn’t qualify as cooperation.”

WHO Director-General Tedros Adhanom Ghebreyesus also dinged the origins report on Tuesday, saying it didn’t sufficiently investigate the possibility of a lab leak.

“The team also visited several laboratories in Wuhan and considered the possibility that the virus entered the human population as a result of a laboratory incident,” Tedros said. “However, I do not believe that this assessment was extensive enough. Further data and studies will be needed to reach more robust conclusions.”

“Although the team has concluded that a laboratory leak is the least likely hypothesis, this requires further investigation, potentially with additional missions involving specialist experts, which I am ready to deploy,” he added.