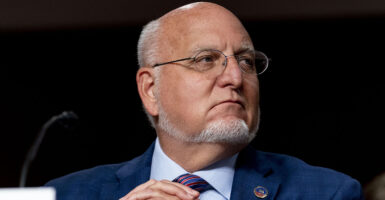 Adherents to Dr. Robert Redfield's belief note that the Wuhan Institute of Virology is near where the coronavirus first started spreading. Pictured: Redfield, then-director of the  Centers for Disease Control and Prevention, attends a hearing of the Senate Appropriations subcommittee reviewing coronavirus response efforts on Sept. 16, 2020, in Washington, D.C. (Photo: Andrew Harnik-Pool/Getty Images)

Dr. Robert Redfield, former director of the Centers for Disease Control and Prevention, cast doubt on the prevalent theory about the origins of the coronavirus, saying in an interview released Friday that he believes the virus escaped from a science lab in China.

“I do not believe this somehow came from a bat to a human,” Redfield told CNN’s Sanjay Gupta for a special on the virus that airs Sunday.

“Normally, when a pathogen goes from a zoonot to human, it takes a while for it to figure out how to become more and more efficient in human to human transmission,” Redfield said.

Redfield, who helped lead the Trump administration’s response to the coronavirus pandemic, said he believes the virus started transmitting in Wuhan, China, in September or October of 2019, likely as the result of a leak from a lab in the city.

“That’s my own feelings. And only opinion. I’m allowed to have opinions now,” he said in the interview.

“Now, I am of the point of view that I still think the most likely aetiology of this pathogen in Wuhan was from a laboratory, escaped,” Redfield said.

Redfield acknowledged that his view puts him in the minority in the scientific community. Most researchers have said that they believe the virus jumped from a bat to a human.

But the lab leak theory has gained traction in recent months as a possible explanation for the virus’ start. Trump administration officials, including former Secretary of State Mike Pompeo and former Director of National Intelligence John Ratcliffe hinted at undisclosed evidence they said supports the lab leak theory.

Adherents to the hypothesis have noted that the Wuhan Institute of Virology, which studies the coronavirus, is near the area where the virus initially started spreading in 2019.

“Science will eventually figure it out. It’s not unusual for respiratory pathogens that are being worked on in a laboratory to infect the laboratory worker,” Redfield said.

A World Health Organization team that visited Wuhan in February to study the origins of the virus is expected to release a report of its findings soon. Some members of the team have said that it is “unlikely” that the virus started from a lab accident.

But the World Health Organization’s team’s credibility has been called into question because of alleged conflicts of interest involving team member Peter Daszak.

Daszak, the lone American on the World Health Organization mission, has received millions of dollars in contracts for research with the Wuhan Institute of Virology.

He has also long been critical of the lab leak theory. Daszak organized a group of scientists in February 2020 to release a letter through The Lancet medical journal casting doubt on the hypothesis.