The Unscientific Attack on the Science of Dr. Scott Atlas 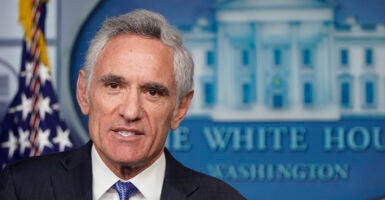 After COVID-19 arrived in the U.S., Dr. Scott Atlas, member of the White House's coronavirus task force, consistently warned that government must follow science, not politics. Pictured: Atlas speaks at a news conference in the briefing room of the White House, Sept. 23, 2020. (Photo: Joshua Roberts/Getty Images)

The news media until recently had rarely criticized the medical advice of experts—especially those who worked for federal bureaucracies, international organizations, or elite universities.

Yet the much-praised Tedros Adhanom Ghebreyesus, director-general of the World Health Organization, has demonstrably weakened the effort to fight COVID-19.

During the critical initial weeks of the virus’ spread, Tedros parroted Chinese propaganda. He falsely assured a complacent world that the virus was likely not transmissible between humans and did not warrant travel bans. That Tedros was the first WHO director not to have a medical degree was seldom cited by the media.

Dr. Ezekiel Emanuel is known to the public for his past advocacy of the Obama administration’s Affordable Care Act. Although he now advises 77-year-old presidential candidate Joe Biden, Emanuel once wrote an article for The Atlantic titled “Why I hope to die at 75,” contending that that life after age 75 is, and should be, mostly over—now an eerie idea in a time of a pandemic that targets the elderly.

Emanuel has often weighed in on the COVID-19 pandemic, sometimes in overly pessimistic fashion by suggesting that some acquired collective immunity and a viable vaccine were not likely to come soon.

Yet Emanuel also has been largely exempt from media criticism. No reporters have questioned his epidemiological expertise despite his background as an oncologist specializing in breast cancer.

The esteemed Dr. Anthony Fauci, director of the National Institute of Allergy and Infectious Diseases, has given conflicting advice on the use of masks, quarantining, and the methods of viral transmission. Yet such inconsistency is either ignored or chalked up by the media to the usual learning curve of dealing with a new epidemic.

So why—other than politics—is there now a concerted media attack on Dr. Scott Atlas, an adviser to the Trump administration on COVID-19 policy?

Atlas has had a distinguished career as one of world’s top neuroradiologists. He has become a national expert on public health policy, especially in the cost-benefit analysis of government programs.

After COVID-19 arrived in the U.S., Atlas consistently warned that government must follow science, not politics, in doing the least amount of harm to its people. He has reminded us that those under 65 rarely die from COVID-19, and that those infected who are younger than 20 usually do not show any serious symptoms.

Accordingly, Atlas has urged the states to focus more resources on the most vulnerable—those over 65, who account for the vast majority of COVID-19 deaths—and allow younger Americans to reenter schools and the workforce with appropriate caution.

Atlas has also warned that the available test data on COVID-19’s infectiousness, spread, and morbidity must be handled with care, given that those who feel sick are more likely to get tested. He argues that those with some natural protection from the virus, either through antibodies from an asymptotic past infection or through T-cells, may be a far larger group than previously thought.

But most importantly, Atlas has warned that government must be careful not to endanger Americans with draconian lockdowns that curtail needed medical examinations, procedures, and treatments.

Just as dangerous as the disease may be quarantine-related spikes in mental illness, substance abuse, child and spousal abuse, and depression from lost livelihoods. Children may be suffering irreparable harm from being locked down and kept out of school.

Atlas has shown that these policy choices unfortunately entail bad options and even worse ones, rather than good choices and even better alternatives. He has not played down the dangers of COVID-19 but rather has reminded us to look at scientific data that often belies media sensationalism.

Many in the media, some of his former colleagues at Stanford Medical School and some other Stanford faculty members have claimed that Atlas—a colleague of mine at the Hoover Institution—has acted unprofessionally. They allege that he has downplayed the lethality of the virus, implying that he is aiding the administration’s efforts to ease out of the quarantine.

Yet few, if any, of these complainants have cited supporting evidence, either from what Atlas has written or said. Often the accusations turn puerile, suggesting that Atlas can’t be a public health expert because he was originally a neuroradiologist.

In fact, rarely reported is that many members of the Stanford community are honored by its medical school receiving global acclaim for its diversity of expert scientific opinion on the virus.

Nobel Prize-winning biophysicist Michael Levitt of Stanford, along with several stellar Stanford epidemiologists, have been praised worldwide for their careful critiques of often media-generated misconceptions—especially on the overreliance on COVID-19 positive test data to calibrate viral prevalence and morbidly.

How ironic that some critics fault Atlas for not following science, but they do so in a fashion that is completely … well, unscientific.