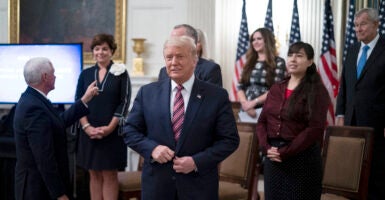 "The concept of going back—even from a management standpoint from the school—every other day seems very strange,” President Donald Trump says during a back-to-school event Wednesday in the State Dining Room at the White House. (Photo: Doug Mills/The New York Times-Pool/Getty Images)

Dr. Melanie McGraw Piasecki is both a pediatrician and a mother of three who wants to see kids back in school after the COVID-19 lockdown that shuttered classrooms in the spring and is on the cusp of doing so this fall across the country.

“My children did not have a particularly great experience in the spring, particularly my youngest, who was in first grade at the time,” Piasecki, of Charlotte, North Carolina, said Wednesday at a White House event. “I think the online learning for the young ones, it just doesn’t work.”

Her children’s school is moving to a hybrid model, a mix of in-classroom and remote learning.

“In terms of being a pediatrician, I just think the science is so clear that the risk of death or hospitalization for children with this virus is so, so low,” Piasecki said. “We know the risks of missing school are catastrophic. We probably don’t even know how high they are yet, and they cover so many different areas.”

Piasecki was among nine Americans—including parents, doctors, teachers, and education officials—who attended the White House event to advocate the reopening of schools.

“We are 100% with you,” President Donald Trump said, referring to children’s return to school.

Piasecki explained the thinking behind it, but said she’s generally supportive of returning to school.

Trump responded:  “But you’d rather see them go back period, right? You’d rather not see that?”

Trump secured $13 billion for states to spend on K-12 education, and is asking Congress to approve another $70 billion for K-12 schools.

“For every year you spend in school, in the future you will earn 10% more in lifetime earnings,” Peterson said at the White House gathering, adding:

So, if we lock down schools for a year, we assign this generation to a 10% earning loss for the rest of their life. This is profound. The costs are vastly greater than people have appreciated, to say nothing about the importance of young people being together with one another.

At this point, Trump said: “So sitting in isolation with a computer, looking at a laptop, is not the same as being out there in the real world?”

Peterson said the COVID-19 pandemic changed his mind about the effectiveness of remote learning.

“At one point, Mr. President, I thought digital learning was the future,” Peterson said. “But, we have learned through this COVID crisis that we haven’t got digital learning to the point where you can really engage young people. They have got to be in that classroom. They have to be with their peers.”