In Responding to Coronavirus, We Should Seek to Thrive, Not Just Survive 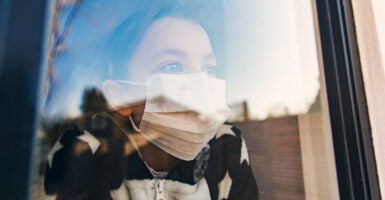 Taking care of our physical health during the pandemic is crucial, but it shouldn’t trump all other goals as we determine the best way for us to respond. Preserving our social and spiritual connections, livelihoods, and mental health are also essential. (Photo: Justin Paget/Getty Images)

Melissa Moschella, an assistant professor of philosophy at The Catholic University of America, is a visiting scholar in the B. Kenneth Simon Center for American Studies at The Heritage Foundation.

The coronavirus pandemic has caused a dramatic rise in mental health problems. My own experience attests to this, as the prolonged COVID-19 lockdown led me into a state of clinical depression and anxiety from which I am still recovering.

And the data indicate that, unfortunately, my own experience is far from unusual.

The Centers for Disease Control and Prevention reported in May that a third of Americans suffered symptoms of clinical anxiety and depression since April—triple the 11% recorded in the first few months of 2019.

Some populations are suffering more than others. Among women, blacks, and Hispanics, the percentage of those suffering mental health strain since April is around 40%. Among young people (age 18-29), it is close to 50%.

Psychologists also worry that factors such as job loss and social isolation—especially disconnection from religious communities—are creating the perfect storm for a spike in suicides.

In May, doctors at one California medical center said that during the quarantine they saw more suicide deaths than deaths from COVID-19.  A survey conducted by the Centers for Disease Control and Prevention at the end of June revealed that 1 in 4 young adults (age 18-24) had seriously considered suicide in the past month.

Although anxiety about the virus itself or grief at the loss of loved ones certainly contribute to this rise in mental health problems, the measures being taken to contain the virus may actually be the biggest culprits.

Lockdowns have led to unemployment rates much higher than the Great Recession, and comparable to that of the Great Depression. This has contributed not only to financial hardship but also to the loss of a sense of purpose and self-worth that come from meaningful work and economic self-sufficiency.

Further, lockdowns have blocked off or severely reduced some of the most important sources of support during times of crisis: close, in-person social interaction—including the comfort and consolation of human touch—as well as the solace, meaning, and connection provided by communal religious practice.

The loss of loved ones has been made more difficult to bear by the inability to gather to mourn their deaths. More generally, social distancing measures and ubiquitous mask-wearing threaten to dehumanize our day-to-day contact with others, making us likely to view others with fear and suspicion as potential sources of infection, rather than with empathy as fellow human beings.

I am not suggesting that we throw caution to the wind and go on with life as if the pandemic did not exist. But many experts believe that broad-based lockdowns—rather than more limited measures targeting specific hot spots and vulnerable populations—are not truly effective.

As the wisdom of our current lockdown measures continues to be debated, it is important to recognize that they come with real, serious, long-term human costs to individuals and society as a whole, and to be willing to ask hard questions about the trade-offs.

The tenor of public discussion on these matters has unfortunately become polarized and politicized. Those who express worries about the negative effects of lockdowns are branded as callously prioritizing the economy over the preservation of human life. The truth, however, is much more complex.

Every human life has intrinsic value, and the protection of human life is a critical element of the common good. However, as Aristotle famously emphasized, the ultimate goal of political society is to make it possible not just to survive, but to thrive—and if the rise in mental health problems is any indication, our society is currently falling fall short of that goal.

We recognize implicitly that physical health does not trump all competing goods. For instance, we accept that the benefits of being able to quickly travel long distances are worth the risk of deaths and injuries that could be avoided if speed limits were much lower.

Of course, the recommendations of public health officials need to be taken into account. We should be aware, though, that those recommendations often are based on incomplete data and predictive models that are far from certain. It is unreasonable to let such recommendations dictate public policy without broader discussion.

The preservation of physical health is crucial, yes, but it is not the only important public good that needs to be taken into consideration.

Think, for instance, about the question of whether to reopen schools for in-person instruction this fall. On the one hand, no matter how many precautions are taken, in-person instruction obviously increases the risk of catching COVID-19 for teachers, students, and their families. Online instruction is undoubtedly safer if we are thinking only about the preservation of physical health.

But what about the many other goods at stake? The American Academy of Pediatrics issued a statement at the end of June strongly recommending that schools attempt to provide in-person instruction for all students, noting the negative impact of school closures not only on children’s learning, but also on their physical and mental health. (Although the academy later softened its stance—arguably for political reasons—the concerns animating the initial recommendation remain valid.)

School closures also have a significant negative impact on families and on the economy as a whole. Even for parents able to work from home, the idea that one can simultaneously work full-time and supervise the education of young children is unrealistic in most cases.

Some children and families may do just fine without in-school instruction—and parents should have the option of online instruction or another form of homeschooling if they believe it best. But other children may end up lagging behind in their educational development and suffering from social isolation in ways that have long-term effects. And some families may end up facing disastrous financial consequences.

All of these negative impacts are also likely to exact a significant toll on mental health. Public officials should think long and hard about these broader costs to children, families, and society as a whole before choosing not to reopen schools, particularly given evidence indicating that the risk to children of serious COVID-19 infection is low, and that young children appear less likely to spread the disease.

Think also about debates regarding restrictions on religious gatherings. Was it necessary to forbid allin-person public religious gatherings—no matter how small or socially distanced—during the lockdown? What value judgments are implicit in deeming churches nonessential, while liquor stores were allowed to remain in operation?

And why were there no public health restrictions on most protests following the tragic death of George Floyd, though severe restrictions or prohibitions on even outdoor religious gatherings remained in place? Freedom of association and the right to political protest are fundamental, but so is the right to free exercise of religion.

Particularly during difficult times, religion and religious community are powerful sources of much-needed solace, strength, meaning, and connection—both to other human beings and to God—that are crucial for the flourishing of both individuals and society as a whole.

My point in discussing these debates surrounding schools and churches is not to suggest any particular course of action, or to condemn any particular decisions that have been made thus far, but to provide examples of the kinds of hard questions that we need to ask in considering how to move forward.

There are no simple answers to these questions. But the dramatic decline in mental health that has resulted in part from the restrictions put in place to contain the virus should make us recognize that it would be a serious mistake to fail to ask them.

We can’t simply presume that the effort to minimize the risk of spreading the coronavirus needs to trump all other goals in determining how best to respond to the current pandemic.

We need to take precautions, particularly for the protection of more vulnerable populations, but fear of death should not prevent us, individually or as a society, from seeking to lead a fully flourishing human life.