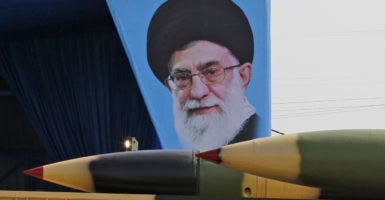 President Donald Trump’s new round of sanctions against Iran is the latest salvo in a wide-ranging effort to pressure the regime in Tehran. The goal is to halt Iran’s exportation of terror and subversion and force Iran to accept tighter restrictions on its nuclear program.

In addition to sanctioning the Office of the Supreme Leader, which is estimated to control a global network of companies worth $100-$200 billion, the Treasury Department sanctioned eight senior leaders of Iran’s Islamic Revolutionary Guard Corps, including the leaders of the Revolutionary Guard’s navy, aerospace, and ground forces.

The president imposed the new sanctions after canceling military strikes that he had ordered against Revolutionary Guard missile batteries in retaliation for the June 19 shoot-down of a U.S. Navy surveillance drone in international air space.

The sanctions signal the Trump administration’s determination to continue its “maximum pressure” campaign against Tehran.

Not surprisingly, the sanctions triggered howls of protest in Tehran. President Hassan Rouhani denounced them as “outrageous and idiotic” and charged that the White House “was afflicted by mental retardation.”

The spokesman for Iran’s Foreign Ministry said the sanctions “[mean] closing the doors of diplomacy by the U.S.”

Trump responded with a series of tweets on Tuesday, including:

Iran’s very ignorant and insulting statement, put out today, only shows that they do not understand reality. Any attack by Iran on anything American will be met with great and overwhelming force. In some areas, overwhelming will mean obliteration. No more John Kerry & Obama!

The president has held the door open to real negotiations to completely and verifiably eliminate Iran’s nuclear weapons program, its pursuit of ballistic missile delivery systems, its support for international terrorism, and other malign behavior worldwide. All that Iran needs to do is to walk through that open door.

The slow-motion confrontation between Iran and the U.S. is dramatically accelerating as the Trump administration’s “maximum pressure” campaign takes effect, forcing Tehran to pay an increasingly painful price for its hostile foreign policy and refusal to return to nuclear negotiations.

The World Bank estimates that Iran is on track for negative 4.5% real gross domestic product growth—the second-worst projection in the world on a key metric of economic health.

Iran’s inflation rate has risen sharply from about 10% in mid-2018 to about 52% in April 2019, as the Iranian rial plummets in value and private spending contracts.

Clearly, U.S. sanctions have had a devastating impact, even without European support.

Extensive economic sanctions against Iran were initially announced in Secretary of State Mike Pompeo’s first major policy speech, which was given at The Heritage Foundation in May 2018.

The new policy, he promised, would impose “unprecedented financial pressure” against Tehran unless it “halted its uranium enrichment program and hostile regional policies.”

Unwilling to give up on either, Iran is now paying an escalating price for its brazen commitment to fomenting instability and violence in the Middle East and beyond.

Now barred from export markets and the international banking system, the mullahs are slowly being denied the resources they need to continue funding essential parts of their dangerous agenda.

Tehran’s draft budget for 2019-2020 is evidence of a regime on the ropes: Among its many austerity measures, the regime planned to implement a 28% cut in funding to its military budget, including a 17% reduction for the Revolutionary Guard, which the State Department rightly designated as a foreign terrorist organization this April.

That’s a significant blow for the Revolutionary Guard, which is a core part of Iran’s grand strategy, charged with acting as the sword and shield of Iran’s Islamic revolution.

The Revolutionary Guard carried out a series of attacks on oil tankers in the Gulf of Oman over the past two months, attacks that are part of Iran’s policy of pushing back against U.S. sanctions with veiled threats against Arab oil exporters and the flow of gulf oil.

On May 12, four oil tankers carrying oil exports from Saudi Arabia and the United Arab Emirates—two adversaries that stood to gain materially by providing alternatives to Iranian oil—were sabotaged with limpet mines.

To minimize the chances of further embarrassing revelations, the Revolutionary Guard then shot down a U.S. Navy surveillance drone on June 19 and falsely claimed it had strayed into Iranian air space.

The Revolutionary Guard’s low-intensity warfare is a calibrated, semi-clandestine campaign of intimidation aimed at expanding Tehran’s leverage by signaling resistance, exploiting the vulnerability of gulf oil exports, and threatening to escalate threats against Arab oil-exporting countries aligned with the United States.

The goal is to force the Trump administration to back down from its maximum pressure campaign and drive a wedge between the U.S. and its European allies, which Tehran hopes will be motivated to help shield Iran from U.S. sanctions.

But this blackmail campaign is unlikely to succeed. Iran’s attacks on oil tankers will not boost its own oil exports or solve its sanctions problems, though they could backfire spectacularly by triggering a costly war with the United States or a diplomatic backlash by oil-importing countries threatened by Iran’s oil blackmail tactics.

Trump, secure in the knowledge that his strategy is paying dividends by penalizing Iran’s hostile policies, has doubled down on his pressure campaign by imposing new economic sanctions and approving U.S. cyberattacks against Revolutionary Guard military computers that control rocket and missile launchers.

It underscores to Tehran that it is vulnerable to additional counter-threats, casts doubt on its military capabilities, and helps reassure nervous U.S. allies that Washington seeks a diplomatic resolution, not a war with Iran.

Still, Iran’s ruthless regime remains on a collision course with the United States. If it continues to reject diplomacy in favor of violence and intimidation, then a military clash and perhaps a full-scale war is increasingly likely.