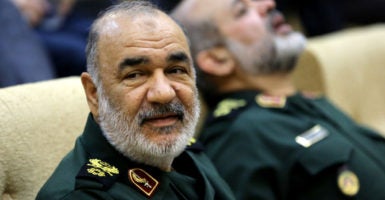 In a historic move on Monday, Secretary of State Mike Pompeo announced the designation of Iran’s Islamic Revolutionary Guard Corps as a foreign terrorist organization.

This is the first time the U.S. has given the designation to part of a government.

The designation will enable the U.S. to further ramp up sanctions against Iran’s tyrannical regime under the administration’s “maximum pressure” policy.

The Revolutionary Guard Corps is both the sword and shield of Iran’s Islamic revolution, dating back to 1979. It is charged with attacking Iran’s enemies overseas, supporting Iran’s network of foreign terrorist proxies, and crushing political opposition to Iran’s revolutionary regime at home.

Last week, the Pentagon released an updated assessment that blamed Iran’s Revolutionary Guard for enabling Iraqi proxy forces to kill 603 American servicemen in Iraq. That accounts for about 17% of the total deaths of U.S. personnel from 2003 to 2011.

The designation as a foreign terrorist organization will become effective next Monday, at which time the U.S. government will gain additional tools for applying sanctions against the Revolutionary Guards and all foreign entities that do business with them, their subsidiaries, and their front companies.

These added sanctions will drain away resources that could be used to export terrorism, thus helping bolster the security of the U.S. and its allies. This will also benefit the Iranian people, who are the chief victims of the Revolutionary Guard.

The new sanctions also will ratchet up pressure on foreign firms that continue to do business with Iran. Such firms could now face prosecution in U.S. courts for providing material support for terrorism if they engage in commerce with Iranian entities affiliated with the Revolutionary Guard.

President Donald Trump hammered this point home in a White House statement Monday when he warned: “If you are doing business with the [Islamic Revolutionary Guard Corps], you will be bankrolling terrorism.”

He also made it clear that more Iran sanctions are coming:

This action sends a clear message to Tehran that its support for terrorism has serious consequences. We will continue to increase financial pressure and raise the costs on the Iranian regime for its support of terrorist activity until it abandons its malign and outlaw behavior.

This added pressure on Iran’s economy is sure to put greater stress on the Iranian regime, which already faces growing discontent from Iranians. The Trump administration hopes that stronger sanctions will compel Tehran to moderate its hostile policies or risk being overthrown by its own people.