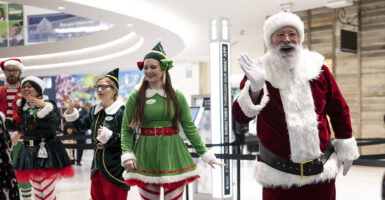 Amazon Smile systematically cuts certain conservatives and Christians out of its Smile program, which allows people to support charities through their Christmas shopping. Pictured: Santa and his elves greet mall patrons moments after the mall opened for Black Friday shopping Nov. 25, 2022, at the Mall of America in Bloomington, Minnesota. (Photo: Aaron Lavinsky/Star Tribune/Getty Images)

Scrolling through Amazon to find the perfect Christmas gift for your niece? Did you know that the moment you click “buy” on that doll, you can support a charity of your choice with some of the proceeds of every purchase?

Of course, Amazon won’t let you support just any cause. Your shopping can’t help violent white supremacists like the Ku Klux Klan, or antisemitic groups like the Nation of Islam, or supporters of that notoriously evil cause, religious liberty.

Take the Alliance Defending Freedom, for example. ADF, one of the premier legal nonprofits in the United States, which has won several cases at the Supreme Court in recent years, has been excluded from Amazon’s charity service Amazon Smile. Meanwhile, the notorious scandal-plagued Southern Poverty Law Center—the organization that got ADF blacklisted in the first place—is more than happy to tell supporters that they can help the SPLC raise money without directly sending the SPLC a dime.

“Did you know there’s an easy way to support the SPLC—at no cost to you—while shopping with Amazon?” the SPLC sent in an email. “Amazon donates a percentage of every purchase made through Smile.Amazon.com.”

“If you plan on shopping with Amazon this holiday season, take advantage of this opportunity to support our work for justice, equity, and human rights every time you make a purchase,” the SPLC added. The organization even included two graphics to help supporters use Amazon Smile and donate to the SPLC.

The SPLC failed to mention, however, that donations would prop up the organization’s discredited accusations of “hate” against mainstream conservative and Christian organizations such as ADF.

Amazon systematically excludes many conservative Christians from the kind of Christmas cheer that comes with knowing that every purchase helps a good cause of their choice. Thanks to Amazon’s decision to exclude organizations that the SPLC brands “hate groups,” those who support religious liberty can’t help ADF with their doll or other purchases.

As I explain in my book “Making Hate Pay: The Corruption of the Southern Poverty Law Center,” the SPLC took the program it used to bankrupt organizations associated with the Ku Klux Klan and weaponized it against conservative groups, partially in order to scare donors into ponying up cash and partially to silence its ideological opponents. The SPLC places ADF and other conservative organizations, such as the Family Research Council, the American Family Association, the Pacific Justice Institute, and the American Freedom Law Center, on a “hate map” along with Ku Klux Klan chapters.

Critics across the political spectrum have voiced opposition and alarm to the idea that a mainstream legal nonprofit like ADF has found itself on the list.

Nadine Strossen, former president of the American Civil Liberties Union, publicly dissented from the “hate group” accusation against ADF, saying that such a claim “suppresses conversations we need to have and voices that should be heard.”

In 2019, the Southern Poverty Law Center fired its co-founder, and saw its president step down amid accusations of racial discrimination and sexual harassment, some of which traced back decades. During this scandal, a former employee revealed that the “hate group” list is a cynical fundraising scam.

Rep. Matt Gaetz, R-Fla., in a congressional hearing, asked then-Amazon CEO Jeff Bezos why Amazon continues to rely on the SPLC. Bezos acknowledged that the company uses “the Southern Poverty Law Center data to say which charities are extremist organizations.”

“Sir, I’m going to acknowledge this is an imperfect system,” Bezos said, adding that he would welcome alternative suggestions.

Amazon under current CEO Andy Jassy did not respond to The Daily Signal’s request for comment about whether the company would reconsider using the SPLC’s “hate group” list to exclude charities from Amazon Smile.

The Ruth Institute, an interfaith coalition aimed at helping “survivors of the sexual revolution,” applied to join Amazon Smile back in 2016. “We were officially rejected from participation,” the organization’s treasurer, Rachel Golden, told The Daily Signal. She reached out to Amazon Smile and received an email with registration steps. After she followed them, Amazon sent another email noting that the Ruth Institute is “not eligible to participate in AmazonSmile.”

Yet Morse did not come up with that language on her own. It traces back to the Catechism of the Catholic Church, which states:

Homosexuality refers to relations between men or between women who experience an exclusive or predominant sexual attraction toward persons of the same sex. It has taken a great variety of forms through the centuries and in different cultures. Its psychological genesis remains largely unexplained. Basing itself on Sacred Scripture, which presents homosexual acts as acts of grave depravity, tradition has always declared that ‘homosexual acts are intrinsically disordered.’ They are contrary to the natural law. They close the sexual act to the gift of life. They do not proceed from a genuine affective and sexual complementarity. Under no circumstances can they be approved.

In citing the Morse quote as evidence that the Ruth Institute is a “hate group,” the SPLC includes context showing that Morse intentionally cited Catholic doctrine. “It’s really important to be well-informed about what the church actually says about homosexual practice … . The church is very clear that same-sex sexual acts are intrinsically disordered and can never be morally acceptable,” she said.

If echoing the Catholic Church’s official position on homosexuality makes an organization a “hate group,” why does the SPLC not put the Catholic Church itself on its “hate map”? The SPLC has not commented on the matter, and did not respond to The Daily Signal’s request for comment for this article.

“Unfortunately, Amazon is continuing to rely on the thoroughly discredited, blatantly partisan SPLC as gatekeeper for its Smile program,” Jeremy Tedesco, senior counsel and senior vice president of corporate engagement at ADF, told The Daily Signal. “It’s been over two years since Amazon CEO Jeff Bezos acknowledged to Congress that his company’s use of the SPLC ‘hate group’ list to determine which nonprofits can participate is ‘an imperfect system.’ Mr. Bezos also stated that he ‘would like a better source if [he] can get it,’ but the issue remains unresolved.”

“By continuing to depend on the SPLC’s own biased and ideologically driven definition of ‘hate group’—which one former SPLC employee rightly described as part of a ‘highly profitable scam’ aimed at ‘bilking gullible Northern liberals’—Mr. Bezos and Amazon are depriving Americans of their ability to choose which causes they want their hard-earned dollars to support,” Tedesco added. “That’s wrong, and Amazon should take tangible steps to restore a culture of charitable choice in its giving program.”

The “hate group” attack carries the threat of more dire consequences than just the Amazon Smile blacklist, however.

A deranged would-be terrorist used the SPLC’s “hate map” to target the conservative Christian group Family Research Council’s Washington, D.C., headquarters in 2012, intending to shoot everyone in the building and smear a Chick-fil-A sandwich in the face of each victim. (LGBT activists had boycotted Chick-fil-A at the time, noting the fast-food chain’s charity, the WinShape Foundation, had donated millions of dollars to conservative Christian organizations.)

A security guard in the lobby prevented the attack, and a jury later convicted the man on terrorism charges. Although the SPLC condemned the assault, it has kept the Family Research Council on its “hate map” ever since.

Amazon has acknowledged that this is an “imperfect system,” but it appears unwilling to change it, even when it means that Amazon Smile systematically prevents conservatives and Christians from the same Christmas cheer that the SPLC offers its supporters.