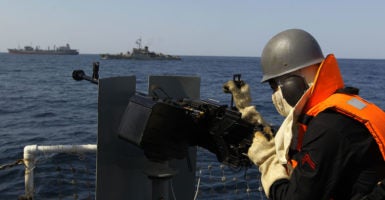 An Iranian seaman mans a gun near the Strait of Hormuz. (Photo: Ali Mohammadi/Polaris /Newscom)

The commander of the navy of Iran’s Islamic Revolutionary Guard Corps, Gen. Alireza Tangsiri, warned on Monday that Iran maintained control of the Persian Gulf and that the U.S. Navy did not belong there.

Tangsiri said Iran had full control of the gulf, as well as of the Strait of Hormuz, which leads into it.

“We can ensure the security of the Persian Gulf, and there is no need for the presence of aliens like the U.S. and the countries whose home is not in here,” he said.

Although it is not clear what he meant by “control,” Iran’s Islamist dictatorship long has threatened to close the Strait of Hormuz if it is attacked or unable to export its own oil through the strait.

The Trump administration seeks to cut Iran’s oil exports to zero through sanctions that are slated to take effect in November, but it is unlikely to reach that goal owing to continued imports of Iranian oil by China and other countries that reject the U.S. sanctions.

The Tangsiri statement probably is meant to signal Tehran’s confidence in its military strength; to underscore Iran’s opposition to sanctions, which the U.S. has pledged to escalate; to deter the U.S. from taking tougher action against Iran; and to enhance Iran’s oil export revenues by boosting oil prices on nervous international oil markets.

The Strait of Hormuz is one of the world’s most important maritime chokepoints. Approximately 18.5 million barrels of oil a day—more than 30 percent of the seaborne oil traded worldwide—flowed through the strait in 2016.

The strait is the jugular vein through which most Persian Gulf oil exports flow to Asia and Europe. Although the United States has greatly reduced its dependence on gulf oil exports, it still would sustain economic damage in the event of a spike in world oil prices, and many of its European and Asian allies import a substantial portion of their oil needs from the region.

The United States defeated Iran’s tactics by reflagging Kuwaiti oil tankers, clearing the mines, and escorting ships through the Persian Gulf, but a large number of commercial vessels were damaged during the “Tanker War” from 1984 to 1987.

If Iran attempts to halt international shipping in the strait, the U.S. Navy and allied forces would take action to open the shipping lanes “in a matter of days,” according to Adm. James Stavridis, the former NATO supreme commander.

Protecting shipping through the strait would not be easy. Iran boasts of having a large arsenal of anti-ship missiles, based on Russian and Chinese designs, that pose significant threats to civilian oil tankers as well as to warships.

Shore-based missiles deployed along Iran’s coast would be augmented by aircraft-delivered laser-guided bombs and missiles, as well as by television-guided bombs.

Iran also has anti-ship mines, including modern mines that are far superior to the simple World War I-style contact mines that it used in the 1980s. The mines could be deployed by Iran’s three Kilo-class submarines, various mini-submarines, helicopters, or small boats disguised as fishing vessels.

The Revolutionary Guards also have underwater demolition teams that could attack docked ships, offshore oil platforms, and other facilities.

In addition to threatening the Strait of Hormuz, Iran also has increased its ability to disrupt shipping through the Bab el-Mandeb Strait at the southern end of the Red Sea. The Revolutionary Guards have worked closely with Yemen’s Houthi rebels, who have launched anti-ship missiles, small-boat attacks, and remote-controlled boat bombs at ships off Yemen’s coast.

The latest saber-rattling statement by the Revolutionary Guards is a reminder that Iran maintains the ability to threaten not only its immediate neighbors, but also international shipping, global oil exports, and the economies of oil-importing states everywhere.

If Iran Blocks Strait, U.S. Must Use Force

U.S. Iran Policy After the Demise of the Nuclear Deal

Iran Hijacked a Ship. The White House Should Demand the Release of Ship, Crew.