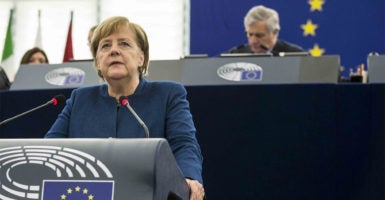 German Chancellor Angela Merkel debates the future of Europe with the members of the European Parliament on Nov. 14. (Photo: Elyxandro Cegarra/ZUMA Press/Newscom)

Since the election of President Donald Trump, the European Union and the United States have increasingly disagreed on Iran policy. The divergence widened in May with Trump’s announcement that the United States was withdrawing from the Iran nuclear agreement.

Washington has since reimposed nuclear sanctions on Iran in two rounds in August and November. Meanwhile, the EU has sought to preserve the nuclear agreement by trying to protect Iran from renewed sanctions.

The EU’s campaign to shield Iran from U.S. sanctions is doomed to fail.

The biggest European companies already have voted with their wallets and pulled out of Iran. They have a lot more to lose if they are cut off from the U.S. market by secondary sanctions than they have to gain from trade with Iran’s much smaller market.

Market forces are too strong for such companies to ignore their economic interests in maintaining access to the U.S. market to oblige EU bureaucrats more worried about alleged U.S. “economic imperialism” than they are about the terrorism, subversion, and ballistic missiles exported by Iran.

The danger is that smaller European companies, with little or no stake in trade with the United States, could risk sanctions and continue trading or investing in Iran. This would dilute the impact and undermine the effectiveness of U.S. sanctions.

European allies played a major role in ratcheting up sanctions pressure on Iran in 2012-13, and they remain a key channel for restoring sanctions pressure now. The EU is Iran’s second-largest trading partner, after China, and a leading consumer of Iran’s oil exports.

Kicking the Tires on the Special Purpose Vehicle

As part of a package of economic incentives designed to induce Iran to remain in the nuclear agreement, the foreign ministers of the EU, Britain, France, Germany, Russia, and China met on the sidelines of the U.N. General Assembly in September to hash out the creation of a “Special Purpose Vehicle”—a new mechanism to facilitate trade between Iran and other states and avoid U.S. sanctions.

The details of the SPV are still being worked out. It would be a clearinghouse that uses some form of a barter system to enable Iran to continue trading its oil for European goods and other goods. Iranian firms could use the SPV to accumulate credits for their exports that could be used to pay for imports from other foreign companies participating in the SPV.

Essentially, the SPV would function like an escrow agent, periodically settling the balance between exports and imports. It would use euros or sterling, rather than U.S. dollars, to minimize the exposure of participating companies to U.S. sanctions.

The Trump administration has strongly denounced the EU’s SPV strategy. Additionally, Secretary of State Mike Pompeo blasted the scheme, calling it “one of the most counterproductive measures imaginable for regional and global peace and security.”

National security adviser John Bolton warned that the United States does “not intend to allow our sanctions to be evaded by Europe or anybody else.”

Washington could take action against SPV-enabled trade by applying sanctions against the banks that transfer money into and out of the SPV, as well as officials who create or operate within the SPV.

Although Washington would not have the same visibility into SPV transactions as in SWIFT transactions, it also could target firms that participate in SPV trade. This will deter most firms from participating, except for small companies heavily dependent on Iran for income.

By colluding with Russia and China to evade U.S. sanctions, the EU seeks to appease Iran, keep it in the flawed 2015 nuclear deal , and deliver a symbolic diplomatic slap to the Trump administration.

But the SPV and other measures such as EU’s updated Blocking Statute are not likely to meet Iran’s demands for remaining in the nuclear agreement. These measures may marginally reduce the impact of U.S. sanctions on trade, but they will not satisfy Tehran’s need for substantial foreign investment and technology transfer.

Iran’s Deputy Foreign Minister Kazem Sajjadpour signaled Tehran’s frustration with the limited progress made on EU efforts to bypass U.S. sanctions: “What is lacking is both speed and efficiency.”

Iran’s distrust of EU bureaucrats is shared by many European businessmen, who are unwilling to risk being targeted by U.S. sanctions that would impose concrete economic penalties in order to enable EU officials to take a symbolic stand against Washington.

To make matters worse, the SPV will be open to non-European firms, meaning that the EU will be enabling Russia and China to advance their own economic and geopolitical interests regarding Iran.

The EU’s misguided efforts to appease Iran not only facilitate Iran’s hegemonic ambitions, but they also could jeopardize the security of EU citizens.

Tehran recently was caught red-handed in foiled plots to bomb an Iranian exile rally in France in June 2018 and an effort to assassinate the exiled leaders of a separatist Arab Iranian opposition group in Denmark in October.

Such activity is nothing new. The Tehran regime has orchestrated a long list of terrorist attacks and political assassinations in Europe.

Yet the EU’s craven efforts to propitiate Iran are likely to increase the risks of future attacks by Iran or its surrogates, including Hezbollah.

The bottom line is that the EU can undermine the impact of U.S. sanctions, but cannot fully protect Iran from the consequences of its hostile policies.

This story was originally publish in The National Interest