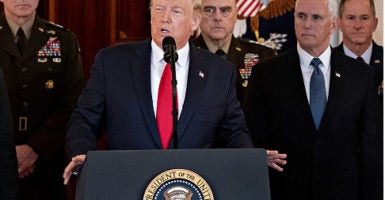 "All of our soldiers are safe, and only minimal damage was sustained at our military bases," President Donald Trump says of Iran's attack on U.S. forces in Iraq in remarks Wednesday at the White House, where he is flanked by Vice President Mike Pence. (Photo: Andrew Harrer/Bloomberg/Getty Images)

Less than 24 hours after Iran fired 15 missiles at U.S. military facilities in Iraq, President Donald Trump signaled a strong desire to deescalate by announcing new sanctions instead of  a military response.

“As long as I am president of the United States, Iran will never be allowed to have a nuclear weapon,” Trump said to begin his formal remarks Wednesday in the Grand Foyer of the White House.

“No Americans were harmed in last night’s attack by the Iranian regime. We suffered no casualties,” Trump said. “All of our soldiers are safe, and only minimal damage was sustained at our military bases.”

“Our great American forces are prepared for anything. Iran appears to be standing down, which is a good thing for all parties concerned and a very good thing for the world.”

No military retaliation doesn’t mean no retaliation, as the president said more U.S. sanctions are coming, without specifying.

“These powerful sanctions will remain until Iran changes its behavior,” Trump said.

Trump appealed directly to the people of Iran, saying they could have a “great future, one that you deserve, one of prosperity at home and in harmony with the nations of the world.”

“The United States is ready to embrace peace with all who seek it,” he said.

>>> Related: Questions Mount as Ukrainian Airliner Crashes in Iran, Killing All Onboard

The 15 ballistic missiles fired from Iran mostly struck al-Assad air base in western Anbar province, but also a base in Irbil in Iraqi Kurdistan to the north.

Members of Congress were set to get a classified briefing from the administration later in the day.

U.S. officials considered Suleimani a terrorist directly responsible for the deaths of more than 600 Americans.

Trump blamed his continuing activities on the Obama administration-led multilateral Iran nuclear agreement of 2015, which dropped sanctions and unleashed some $150 billion to the Islamist regime in return for its agreement to suspend its nuclear weapons program.

Trump said the money released by the U.S. to Iran was used to pay for attacks on American forces, including this one.

Trump pulled out of the Iran nuclear deal in 2017, but European allies remain in the agreement.

“For far too long, all the way back to 1979, to be exact, nations have tolerated Iran’s destructive and destabilizing behavior in the Middle East and beyond,” Trump said. “Those days are over.”

The president specifically called on the United Kingdom, France, Germany, China, and Russia to exit “the remnants of the Iran deal.” He also called for the North Atlantic Treaty Organization to step up.

“NATO should become much more involved in the Middle East process,” Trump said.

>>> Related: Iran Fires 15 Ballistic Missiles at US Forces in Iraq