Iran Fires 15 Ballistic Missiles at US Forces in Iraq 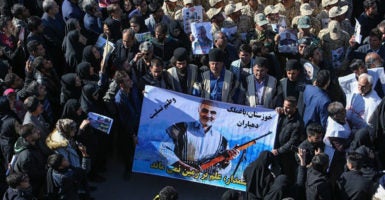 Iran lobbed more than a dozen ballistic missiles at U.S. military forces in Iraq, mostly at a remote base at al-Assad, the Defense Department said Tuesday night.

No details on casualties or damage were available from the White House or Pentagon as of midnight.

Secretary of State Mike Pompeo and Defense Secretary Mark Esper, among other national security officials, met earlier in the night with President Donald Trump at the White House.

Trump tweeted about the matter at 9:45 p.m. EST, saying he would have more to say Wednesday morning.

“All is well! Missiles launched from Iran at two military bases located in Iraq. Assessment of casualties & damages taking place now,” the president wrote in the tweet. “So far, so good! We have the most powerful and well equipped military anywhere in the world, by far! I will be making a statement tomorrow morning.”

For a time, cable and other news outlets reported that Trump would address the nation, but the White House announced shortly after 8 p.m. that the president would not do so.

“We are aware of the reports of attacks on U.S. facilities in Iraq. The president has been briefed and is monitoring the situation closely and consulting with his national security team,” White House press secretary Stephanie Grisham said.

The administration’s decision to hold off on any early remarks from Trump was interpreted by some cable TV commentators as evidence that no major loss of life or property destruction had occurred–and, later, that Iran deliberately pulled its punch and avoided American casualties.

Amid the strong partisan strife in Washington, House Speaker Nancy Pelosi, D-Calif., tweeted that she was closely monitoring the matter but also took a shot at the president for “needless provocations.”

“Closely monitoring the situation following bombings targeting U.S. troops in Iraq,” Pelosi tweeted. “We must ensure the safety of our servicemembers, including ending needless provocations from the Administration and demanding that Iran cease its violence. America & world cannot afford war.”

“The missiles were launched from Iran at targets inside of Iraq housing U.S. military personnel,” Graham said, adding, “The president has all the authority he needs under Article II [of the Constitution] to respond, and how he responds is yet to be determined, but he has that authority to respond.”

[Trump] doesn’t want regime change, he wants the behavior of the regime to change in three areas. Their ballistic missile program needs to change … they need to stop being the largest state sponsor of terrorism, and we need a nuclear deal that does not ensure them a pathway to a bomb, like [President] Obama.

“We would have to send a clear message back to Iran,” McCarthy said.

Iran launched 15 missiles in all, of which 11 hit their targets and four failed in flight, a U.S. defense official told the Los Angeles Times. The official said only one missile struck a base in Irbil in Iraqi Kurdistan to the north, while 10 others hit al-Assad air base in western Anbar province.

Jonathan Hoffman, assistant to the defense secretary for public affairs, issued a statement before 8 p.m. explaining that Iran launched missiles against U.S. military and coalition forces in Iraq about 5:30 p.m. EST.

“It is clear that these missiles were launched from Iran and targeted at least two Iraqi military bases hosting U.S. military and coalition personnel at al-Assad and Irbil,” Hoffman said. “We are working on initial battle damage assessments.”

In recent days and in response to Iranian threats and actions, the Department of Defense has taken all appropriate measures to safeguard our personnel and partners. These bases have been on high alert due to indications that the Iranian regime planned to attack our forces and interests in the region.

As we evaluate the situation and our response, we will take all necessary measures to protect and defend U.S. personnel, partners, and allies in the region.

All options are likely on the table, but the United States must consider consequences, Peter Brookes, senior research fellow for national security and foreign policy at The Heritage Foundation, told Fox in an interview Tuesday night.

“We’ve weakened their economy significantly—it contracted by 10% last year. There are still things we could do there,” he said.

Brookes also mentioned military options, saying “that could include everything from political targets to military targets to economic targets.”

Iranian Foreign Minister Javad Zarif described the strike into Iraq as “concluded” and as taking “proportionate measures” against the U.S. He tweeted:

“We are warning all American allies, who gave their bases to its terrorist army, that any territory that is the starting point of aggressive acts against Iran will be targeted,” the statement said.

This article has been modified and updated since first being published.