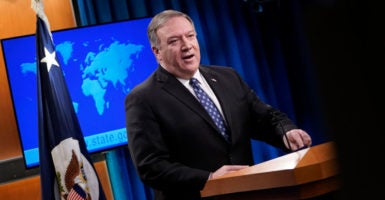 "It was the right decision; we got it right," Secretary of State Mike Pompeo says Tuesday at the State Department, speaking of the U.S. drone strike that killed one if Iran's top generals, Qassim Suleimani, in Iraq. (Photo: Win McNamee/Getty Images)

The United States will not target “cultural sites” in Iran for military strikes, Secretary of State Mike Pompeo said, days after President Donald Trump alluded to doing so and strongly defended the possible move.

Iranian cultural sites are not among U.S. targets, Pompeo told reporters Tuesday during a press conference.

“Every target that’s being reviewed, every effort that’s being made, will always be conducted inside the international laws of war,” Pompeo said. “I’ve seen it. I’ve worked on this project, and I’m very confident of that.”

“The real risk to Persian culture does not come from the United States of America,” the secretary of state said, referring to Iran’s Islamist regime.

Tensions have increased between Iran and the United States since a U.S. drone strike killed one of Iran’s generals, Qassim Suleimani, early Friday in Iraq.

Defense Secretary Mark Esper also said during a press conference later Tuesday that he was confident Trump would not give an order violating international law.

Before the press pool in the Oval Office, Trump repeated an earlier comment, but also said he would follow international law.

They are allowed to blow up everything that we have and there is nothing that stops them and we are, according to various laws, supposed to be very careful with their cultural heritage. And, you know what, if that’s what the law is, I like to obey the law. But think of it: They kill our people and blow up our people, and we have to be very gentle with their cultural institutions. But I’m OK with it. It’s OK with me.

Toward the end of the State Department press conference, Andrea Mitchell of NBC News and MSNBC asked Pompeo again about targeting cultural sites in Iran.

Mitchell referred to a tweet Saturday by Trump and read a quote from the president about Iran’s leaders in which he told reporters Sunday aboard Air Force One: “They’re allowed to kill our people. … And we’re not allowed to touch their cultural sites. It doesn’t work that way.”

Mitchell asked Pompeo: “I’m wondering whether you would also push back in your advice or in your role.”

At another point, the secretary of state mocked the idea that Suleimani was “this kind gentleman, this diplomat of great order.”

Pompeo offered perspective about the criticism by the president’s opponents of his mention of cultural sites in Iran as possible targets if Iran retaliates against the U.S.

If you want to look at who has denied religious freedom, if you want to know who has denied—the Persian culture is rich and steeped in history and intellect, and they’ve denied the capacity for that culture to continue. If you go back and look at the holidays around Cyrus and Nowruz, they’ve not permitted people to celebrate.

They’ve not allowed [the families of] people that they’ve killed—that Qassim Suleimani killed—they’ve not allowed them to go mourn their family members. The real risk to Persian culture does not come from the United States of America.

Pompeo strongly defended the drone strike that killed Suleimani, 62, a high-ranking military leader long considered by the U.S. to be a terrorist for his record as commander of Quds Force, the division of the Islamic Revolutionary Guard Corps that conducts secret activities outside Iran.

“It was the right decision. We got it right,” Pompeo said. “The Department of Defense did excellent work and the president had an entirely legal, appropriate, and a basis, as well as a decision that fit perfectly within our strategy [on] how to counter the threat of malign activity from Iran more broadly.”

Pompeo disregarded a claim by Iran that Suleimani was in Iraq for diplomatic reasons.

Iranian Foreign Affairs Minister Mohammed Javad Zarif made the argument about why the major general had just arrived at Baghdad International Airport.

So, Zarif’s statement. His first statement that Suleimani was traveling to Baghdad on a diplomatic mission—anybody here believe that? Is there any history that would indicate that it was remotely possible that this kind gentleman, this diplomat of great order, Qassim Suleimani, had traveled to Baghdad for the idea of conducting a peace mission?

I made you reporters laugh this morning. That’s fantastic. We know that wasn’t true. We not only know the history, we know in that moment that was not true.

“It’s fundamentally false. He was not there on a diplomatic mission trying to resolve a problem,” Pompeo said of Suleimani, adding:

I know there’s been some story that he was there representing a Saudi peace deal. I’ve spoken to my Saudi counterparts at great length. I’ll leave to them what the contents of their messages may be. But I can assure you that they will share my view, that he was not there representing some kind of agreement that was going to reduce risk or reduce the risks to the lives of Americans when he was on that trip.

Asked about the intelligence gathered to justify the strike, Pompeo said Trump evaluated all the information about threats and risks.

“We could see clearly that not only had Suleimani done all of the things that we have recounted—right, hundreds of thousands [killed]—a massacre in Syria, enormous destruction of countries like Lebanon and Iraq, where they’ve denied them sovereignty. And the Iranians have really denied people in those two countries what it is they want, right—sovereignty, independence, and freedom,” Pompeo said.

Suleimani, he said, “was continuing the terror campaign in the region.”