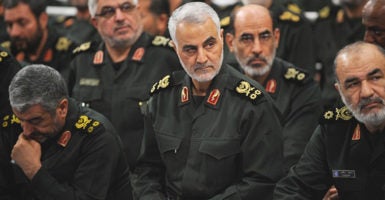 President Donald Trump ordered an airstrike in Iraq on Thursday that killed Gen. Qassim Suleimani, one of the most senior members of the Iranian government.

Suleimani, with the rank of major general, headed the Quds Force, the terrorist arm of Iran’s Islamic Revolutionary Guard Corps.

“Soleimani made the death of innocent people his sick passion, contributing to terrorist plots as far away as New Delhi and London,” Trump said Friday, using an alternate spelling of the general’s name. “Today, we remember and honor the victims of Soleimani’s many atrocities, and we take comfort in knowing that his reign of terror is over.”

For about 21 years, Suleimani commanded the Revolutionary Guard’s Quds Force, charged with carrying out clandestine military and terrorist activities outside Iran’s borders as the country seeks to expand its regional influence in the Middle East.

“We took action last night to stop a war. We did not take action to start a war,” Trump said.

Here are five things to know about the fallen terrorist leader.

Suleimani orchestrated a series of attacks against U.S. forces in Iraq in the past several months, culminating in a rocket attack Dec. 27 that killed an American citizen, wounded four U.S. service members, and threatened the lives of many more American personnel.

Suleimani also ordered the recent assault on the U.S. Embassy in Baghdad, according to the State Department.

He supported lethal assistance to Revolutionary Guard proxy groups that targeted and killed more than 600 Americans between 2003 and 2011.

The State Department confirmed Friday that Suleimani was traveling in the Middle East, coordinating further “imminent large-scale attacks against U.S. diplomats and service members.” It added: “Threats were highly credible, and the intelligence is sound.”

2. Where Did Suleimani’s Terrorism Strike?

Quds Force—under Suleimani’s direction—planned and conducted terrorist attacks across six continents and inside the United States, according to the State Department.

3. What Actions Did He Take in Iraq?

The State Department says that Suleimani personally directed and provided arms to militias in Iraq for more than a decade, both during the Iraq War and as the U.S. military presence was winding down in the country.

4. What Were His International Terrorist ‘Credentials’?

The State Department, the United Nations, and the European Union have roundly condemned Suleimani over the years.

The United Nations and European Union also sanctioned him. In 2016, he was banned from international travel by U.N. Security Council Resolution 2231. Suleimani defied the U.N. resolution and continued traveling to work with terrorist militia groups in Iraq, Syria, and Lebanon.

The  European Union condemned him in a resolution in 2011 for supporting the regime of Syrian dictator Bashar Assad.

U.N. Security Council Resolution 1747, in 2007, sanctioned  Suleimani for his involvement in the Iranian nuclear program.

5. Were Prior Presidents Concerned About Suleimani?

“What the United States did yesterday should have been done long ago,” Trump said Friday.

The State Department, under the Trump administration, designated the Revolutionary Guard as a foreign terrorist organization for its activities in 2019.

Though not militarily, Suleimani had been the target of the wrath of previous presidents of both parties.