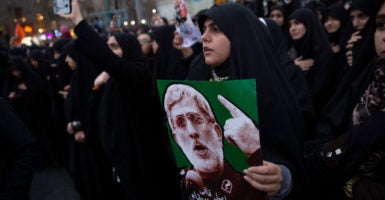 Qassem Suleimani’s death is a huge loss for Iran’s regime and its Iraqi proxies. It also is a major operational and psychological victory for the U.S. Pictured: Iranians in Tehran protest the U.S. strike that killed Suleimani and a militia leader in Iraq. (Photo: Majid Saeedi/Getty Images)

The U.S. airstrike Thursday night that killed Iranian Gen. Qassim Suleimani was a bold and decisive effort to remove a key Iranian military and terrorist leader at a time when Iran appeared to be poised to escalate the crisis in Iraq by plotting an “imminent attack,” according to Secretary of State Mike Pompeo.

Suleimani was the mastermind behind Iran’s low-intensity warfare and terrorist campaign against the U.S. and its allies for many years. As the leader of the Quds Force, the elite special-operations wing of Iran’s Islamic Revolutionary Guard Corps, Suleimani essentially served as Iran’s viceroy for Iraq, Syria, and Lebanon.

He rose to prominence inside Iran and in the region by supervising Iran’s expanding network of surrogate militias, terrorist groups, and radical Islamist allies.

His Quds Force orchestrated the formation, arming, training, and operations of a foreign legion of Iraqi, Syrian, Lebanese, Afghan, Yemeni, and other militant groups that Tehran has deployed to advance its imperial agenda and to export Iran’s Islamist revolution.

Iran long has used surrogate militias to do its dirty work in Iraq. One of the terrorists killed along with Suleimani was Abu Mahdi al-Muhandis, the leader of Kataib Hezbollah (“Brigades of the Party of God”).

Like Suleimani, al-Muhandis was designated as a terrorist by the United States.  He was convicted and condemned to death in absentia in Kuwait for his involvement in the 1983 bombings of the U.S. and French embassies in Kuwait City.

This radical Iraqi militia—modeled on Lebanon’s Hezbollah terrorist militia (which Suleimani also helped to build up)—was formed in 2007 as a proxy group under the direct command of Suleimani’s Quds Force. Kataib Hezbollah was one of the Iraqi militias that the Quds Force employed to kill more than 600 U.S. troops in Iraq from 2003 to 2011, according to Pentagon estimates.

Kataib Hezbollah also was responsible for numerous rocket attacks in recent months on U.S. troops in Iraq, including the Dec. 27 rocket attack that killed an American citizen and provoked the current crisis.  The U.S. retaliated for the rocket attack with airstrikes against five Kataib Hezbollah bases and weapons-storage sites in Iraq and Syria on Dec. 29.

This prompted Kataib Hezbollah and other Iran-backed militias to mobilize a mob that besieged the U.S. Embassy in Baghdad on Dec. 30-31 and tried to set in on fire. Suleimani arrived at Baghdad airport shortly thereafter, undoubtedly planning to orchestrate more dangerous attacks on U.S. personnel in Iraq.

Suleimani’s death is a huge loss for Iran’s regime and its Iraqi proxies. It also is a major operational and psychological victory for the United States.

The strong U.S. military response and demonstrated intelligence capacity to identify, track, and target Suleimani’s movements should bolster U.S. deterrence of Iranian aggression in the long run, although Iran is likely to escalate attacks in Iraq and elsewhere in the immediate aftermath of the strike.

But as Secretary of Defense Mark Esper said Thursday before the strike: “The game has changed.”  Washington will no longer tolerate attacks by Iran-backed proxy groups without inflicting a heavy price, not only on them, but on Iran, which historically has acted with impunity by conducting a shadow war through surrogates.

This policy of holding Tehran accountable for the attacks of its proxies was announced by the White House in a 2018 statement, after Iranian-backed Iraqi militias attacked American diplomatic facilities in Iraq:

Over the past few days, we have seen life-threatening attacks in Iraq, including on the United States Consulate in Basra and against the American Embassy compound in Baghdad. Iran did not act to stop these attacks by its proxies in Iraq, which it has supported with funding, training, and weapons.

The United States will hold the regime in Tehran accountable for any attack that results in injury to our personnel or damage to United States government facilities. America will respond swiftly and decisively in defense of American lives.

President Donald Trump has repeatedly warned Iranian leaders about the potential consequences of attacks on Americans. It should be no surprise that he enforced his own “red line.”

The successful strike against Suleimani is a powerful message to Iranian leaders that their old tactics of “fighting to the last Iraqi” in a shadow war against the U.S. now entail many more risks and costs. If sustained over time, that could alter their cost-benefit calculus and lead them to moderate their hostile and aggressive policies.

But in the immediate aftermath of Suleimani’s death, Tehran is likely to respond on several tracks, as usual. On one track, it will play the victim card and seek to mobilize its Iraqi allies to expel the U.S. military presence through legislation passed by Iraq’s parliament or by a direct request of Iraq’s weak coalition government, which has been infiltrated by Iran’s Iraqi friends.

On another track, the Quds Force is likely to employ its proxy network on a variety of fronts to launch terrorist attacks and kidnapping operations to take American hostages.

Tehran also may choose to ratchet up its cyberattacks, assaults on oil tankers, and missile strikes on the energy infrastructure in the Persian Gulf, or accelerate its violations of its nuclear nonproliferation commitments.

However, all these tracks now have become increasingly risky. All are unlikely to yield significant gains, but sure to provoke even stronger action from the Trump administration.

The conflict with Iran will continue, but the rules of the game are shifting.

U.S. Airstrikes in Mideast—Sending This Clear Message to Friends and Foes Alike