Reputations and Respect Are Earned by Action, Not Talk 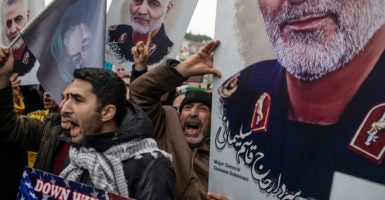 At the August 2017 gathering of the Aspen Security Forum, one of the prominent security conferences held annually in the United States, a panel discussed the implications of the Trump administration’s emerging Middle East policies.

Since the panel was composed mostly of former Obama administration officials, as you would imagine the group was quite critical of the current administration’s policies, then about seven months old.

Because the ground rules for the conference promise anonymity, I can’t use names.

One panelist, a former senior State Department official, decried the United States’ then-current relationship with Iran and mentioned how it was much better under the previous administration.

For evidence, he cited the January 2016 incident in which two small U.S. Navy vessels inadvertently crossed into Iranian waters and were taken prisoner by the navy of the Islamic Revolutionary Guard Corps (the same organization led by Iranian Gen. Qassim Suleimani until he died Friday in a U.S. drone strike in Baghdad).

The Iranians forced the U.S. sailors to kneel with their hands clasped behind their heads as they were being captured. Iranian TV cameras documented the event and the prisoners.

The panelist spoke in glowing terms of how then-Secretary of State John Kerry, because of the close relationship he forged during negotiation of the Iran nuclear deal, had Iranian Foreign Minister Mohammed Javad Zarif on “speed dial” and was able to immediately begin negotiations for the sailors’ release.

Meanwhile, the sailors languished in Iranian captivity for over 15 hours.

The Aspen Security Forum panelist declared that the incident and how it was handled was a model for a close relationship established through effective diplomacy.

Later, during the question and answer period, a distinguished gentleman stood up and obtained the microphone. He identified himself as the ambassador from a Persian Gulf nation.

In reference to the Iranian capture of U.S. sailors, he then said (and I am paraphrasing from memory):

Here in the United States, you may view this naval incident as having been solved effectively. But in my region of the world, it was viewed completely differently. We saw a world power humiliated on the world stage by Iran, with your sailors’ captivity televised on global TV, your sailors held prisoner for hours, and you were just talking. You cannot imagine the negative impact this had on the perception of your country in the region.

I remember the ambassador concluding by saying: “I cannot believe if something like this were to occur today, that President [Donald] Trump would respond the same way.”

You could have heard a pin drop.

Now, with the killing of Suleimani, who was known to be actively planning attacks against American interests, we have our answer.

No, this administration will not accept Iranian aggression and terrorism.  When attacked or challenged, the United States will respond appropriately.  The United States, by defending its interests and people, has shown that it is prepared to act, and act decisively. It’s a message that many will note.

Deterrence requires the capability to act and the will to do so. America has the strongest military in the world. But the military deters aggression only if other nations and organizations believe our leaders have the fortitude to use it.

By its actions last week, America has shown the will to act. By doing so, the Trump administration actually reduces the likelihood that U.S. forces will have to be committed to combat.

It’s a lesson worth noting.