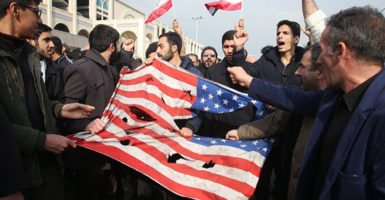 Iranians tear up an American flag Friday during a demonstration in Tehran after news that a U.S. strike in Iraq killed Gen. Qassim Suleimani, commander of the Quds Force of Iran's Islamic Revolutionary Guard Corps. (Photo: AFP/ Getty Images)

The confrontational political environment in Washington made it more difficult for the president to give Congress advance notice of the U.S. drone strike that killed Iran’s chief terrorist in Iraq, national security experts contend.

House Speaker Nancy Pelosi, D-Calif., said she plans to introduce a war powers resolution to curb future strikes against Iran, and a companion version in the Senate is sponsored by Sen. Tim Kaine, D-Va.

“It’s not a violation of the law. The president has the right to launch this strike. It’s a question of whether he should act without notification of Congress,” Lawrence B. Brennan, a professor specializing in maritime law at Fordham University Law School, told The Daily Signal.

“Historically, presidents have given some briefing to Congress and allies ahead of time,” Brennan, a retired Navy captain, said.

“The political situation right now in Washington is so confrontational, how does the White House notify the chairman of the House Intelligence Committee, who handled the president’s impeachment, and trust this won’t leak to the press?” Brennan said, referring to Rep. Adam Schiff, D-Calif., who  would be one of eight lawmakers on Capitol Hill normally notified based on his position.

In 1986, President Ronald Reagan notified certain members of Congress and allies before bombing Libya, which some attribute to dictator Moammar Gadhafi’s ability to relocate and survive the strike.

“I could argue both sides of this. Books could be written on this,” Brennan said, adding:

Constitutionally, the president is the commander in chief. At the end of the day, Congress can enforce it by [introducing] a resolution that may or may not pass Congress. Or, Congress could do what it did in Vietnam, which is just cut the funding.

The War Powers Resolution of 1973, also known as the War Powers Act, is a federal law designed to check the U.S. president’s power to commit to an armed conflict without the consent of Congress. The House and Senate overrode President Richard Nixon’s veto to pass it.

The law requires the president to notify Congress within 48 hours of authorizing military action. It prohibits the military from remaining in a conflict for more than 60 days and provides a 30-day withdrawal period if Congress doesn’t authorize use of military force.

“Nobody under the age of 95 lived during a declaration of war. Most wars have been based on U.N. resolutions and authorizations of military force,” Brennan said. “That is not what the Framers of the Constitution envisioned during a different era.”

However, the matter of war powers has not been adjudicated, and the Supreme Court would not likely consider it because this largely is a political issue, Brennan said.

In 2000, several members of Congress, led by then-Rep. Tom Campbell, R-Calif., challenged President Bill Clinton’s military action in Yugoslavia, which occurred without congressional authorization. The U.S. Court of Appeals for the District of Columbia dismissed the case, asserting members of Congress lack standing.

Trump acted lawfully in ordering the strike against Suleimani, said Cully Stimson, senior legal fellow at The Heritage Foundation, where he manages the national security law program in the Meese Center for Legal and Judicial Studies.

“This was not an assassination,” Stimson said Monday during an appearance on Fox News Channel. “This was a lawful killing of a combatant on the battlefield who was responsible for more than 603 American deaths, according to DOD statistics, from his own militias and thousands of American deaths or injuries by his proxies.”

The chances of Pelosi’s resolution clearing both the House and Senate are zero, said Frank Gaffney, who was an assistant secretary of defense for international security policy during the Reagan administration.

“What the Democrats really want to do is sully the commander in chief’s constitutional authority,” Gaffney, executive chairman of the Center for Security Policy, told The Daily Signal. “This shows a complete indifference to national security in the face of the enemy.”

Trump has said his tweets were notification enough to Congress for future actions.

“I don’t think tweeting was ever contemplated when this was passed in 1973,” Gaffney said, but added that Trump clearly is making no secret that he will strike if Iran attacks U.S. abroad again.

“The War Powers Resolution is one symptom of a larger problem,” he said. “Iranians would reasonably interpret—because of the partisan attacks on Trump from Democratic congressional figures and Democratic presidential candidates—[the division] as evidence that they can with impunity attack the U.S. abroad and if they do, will find people with official capacity in Washington that will blame Trump.”

Gaffney said the situation in Washington now may be too polarized for Trump to notify Congress—particularly given what he considers a rare opportunity to kill such a high-ranking figure with limited collateral damage.

“In my experience, since the select intelligence committees in the House and Senate were established, they have never been this political or weaponized,” Gaffney said. “As for other Group of Eight members, including Speaker Pelosi, I can’t say. But, I think Adam Schiff has disqualified himself from handling classified information.”