Questions Mount as Ukrainian Airliner Crashes in Iran, Killing All Onboard, Hours After Missile Attack 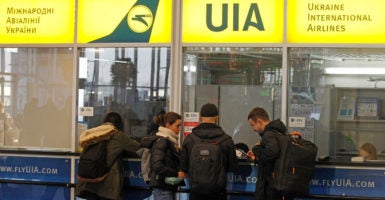 “The extreme political tensions of the evening made the risk of air defense systems on either side misidentifying and inadvertently shooting down an airliner filled with innocents very real,” Heritage Foundation defense expert John Venable says. Pictured: Activity Wednesday at a ticket counter for Ukraine International Airlines at the International Airport Boryspil in Kyiv, Ukraine. (Photo: Pavlo Gonchar/SOPA Images/LightRocket via Getty Images)

KYIV, Ukraine—A Ukrainian International Airlines Boeing 737-800 crashed Wednesday morning only minutes after takeoff from Tehran and only hours after Iran launched a barrage of ballistic missiles at U.S. forces based in neighboring Iraq.

Data from Flightradar24, a website that tracks aircraft, indicates the Ukrainian airliner crashed roughly two minutes after taking off from Imam Khomeini International Airport bound for Kyiv just after 6 a.m. local time. The plane reached about 8,000 feet in altitude.

All 176 passengers and crew on board the Ukrainian airliner died, Iranian officials say.

According to Iraq’s military, the missiles landed between 1:45 and 2:15 a.m. local time. No Americans have been reported injured or killed in that attack, U.S. officials say.

The Ukrainian Embassy in Tehran initially said in a statement on its website that the crash of the Ukrainian airliner probably was not caused by a terrorist attack or a missile.

However, the embassy subsequently retracted that statement and now says it isn’t clear what caused the crash.

Ukrainian International Airlines announced it was suspending all flights to Tehran “until further notice.” The Ukrainian Aviation Administration banned all flights in Iranian airspace.

Iranian officials immediately said the crash was caused by a mechanical malfunction, specifying that one of the airliner’s two turbofan engines caught fire shortly after takeoff.

Aviation experts note, however, that it typically takes weeks or months of investigations to determine the cause of an aircraft crash.

Iranian personnel reportedly have found the downed plane’s two black boxes, but they so far refuse to hand them over to Boeing, according to news reports.

John Venable, senior research fellow for defense policy at The Heritage Foundation,  cautioned that it’s too early to tell what brought down the Ukrainian airliner.

However, Venable, a former U.S. Air Force F-16 pilot with 3,000 hours of fighter time, also told The Daily Signal that he was alarmed by the continuation of civilian air traffic in Iran throughout Wednesday morning.

“The extreme political tensions of the evening made the risk of air defense systems on either side misidentifying and inadvertently shooting down an airliner filled with innocents very real,” Venable said.

The Boeing 737-800 aircraft that went down was delivered direct to Ukraine International Airlines from the manufacturer in 2016. The aircraft had no known mechanical faults and had passed an inspection Jan. 6, Ukrainian officials said.

The single-aisle Boeing 737-800 is an earlier model of the 737-MAX aircraft, which was grounded after two fatal crashes last year. The 737-800 does not carry the flawed anti-stall software deemed responsible for the MAX crashes.

Ukrainian International Airlines representatives also downplayed the possibility of human error, saying the crew onboard the downed aircraft was highly experienced and had received the proper amount of rest prior to the flight.

An investigation will determine the cause of the crash, Ukrainian officials said.

Some U.S. aviation experts initially were skeptical about the possibility that Iranian air defenses may have brought down the Ukrainian airliner, mistaking it for an American warplane.

However, the timing of the Ukrainian airliner’s crash just hours after the Iranian missile strike into neighboring Iraq has raised questions about why civilian aircraft were still flying from Tehran’s international airport Wednesday morning, given that Iran’s air defense network was certainly on high alert for U.S. retaliatory airstrikes.

Before Wednesday, some airlines already had canceled flights into both Iranian and Iraqi airspace due to escalated military tensions between Washington and Tehran. According to Ukrainian news reports, though, other airlines such as Turkish Airlines, Pegasus,  AtlasGlobal, and Qatar Airlines all had continued flights into Tehran after Iran launched the missiles.

By allowing commercial air traffic to go on unabated Wednesday, Iran may have been looking for an American misstep, Heritage’s Venable said.

Or, it could have been on the hope that an American miscalculation would bring down an airliner and deliver a public affairs nightmare for the United States, giving Iran a political victory where they stood no chance of gaining one from their military. Either way, the world should take note.

The U.S. Federal Aviation Administration issued a prohibition on Wednesday banning U.S. aircraft from operating in Iraq, Iran, the Persian Gulf, and Gulf of Oman, citing “heightened military activities and increased political tensions in the Middle East, which present an inadvertent risk to U.S. civil aviation operations due to the potential for miscalculation or misidentification.”

Most U.S. carriers already avoided the region, according to Keith Mackey, an aviation safety consultant who has more than 30,000 hours of pilot flight time in aircraft such as the Boeing 747 and Airbus A-300.

“When you fly over a war zone, you’re at risk,” Mackey told The Daily Signal in a telephone interview.

Mackey noted that, based on available flight data, the crashed Ukrainian airliner had a normal climbout, which did not indicate a mechanical problem from the flight’s outset.

“Something took place in a very short length of distance and time to cause the plane to go down,” Mackey said.

He added that, in his opinion, commercial flights should not have continued at Tehran’s Imam Khomeini International Airport following the missile launches.

>>> Related: Iran Fires 15 Ballistic Missiles at US Forces in Iraq

Ukrainian President Volodymyr Zelenskyy, who was in Oman on an official visit, departed for Kyiv on Wednesday after learning about the crash.

Scary news from the Middle East. This morning, after taking off from Imam Khomeini International Airport (Tehran), the passenger aircraft of Ukraine International Airlines crashed—crashed near the airport. According to preliminary reports, all passengers and crew were killed. Our embassy clarifies information about the circumstances of the tragedy and the death toll.

In Ukraine, the crash conjured memories of the July 2014 shoot-down of Malaysia Airlines Flight 17 by Russian forces over the eastern Ukrainian warzone.

According to multiple independent investigations, a Russian BUK surface-to-air missile, operated by a Russian military crew, shot down the Boeing 777 airliner, killing all 298 passengers and crew onboard. That incident increased worldwide restrictions on civilian airliners flying near active combat areas.

Iran’s missile attack marked the latest escalation of a monthslong, tit-for-tat military standoff between Iran and the U.S.

On Dec. 27, Iran’s proxy militants in Iraq attacked a U.S. military base in the country, killing an American contractor. Following a retaliatory U.S. airstrike, Iran-backed protesters stormed the U.S. Embassy in Baghdad.

Responding to those acts of Iranian aggression, President Donald Trump authorized a targeted drone airstrike Jan. 3 that killed Qassim Suleimani, commander since 1998 of Iran’s Quds Force, the unit of the Islamic Revolutionary Guard Corps that conducts military and spy operations outside Iran.

Suleimani was responsible for the deaths of hundreds of U.S. troops during the Iraq War, U.S. officials say. And, according to the Pentagon, the Iranian major general had plans for more attacks against U.S. diplomats, service members, and other American interests, both in Iraq and elsewhere throughout the Middle East.