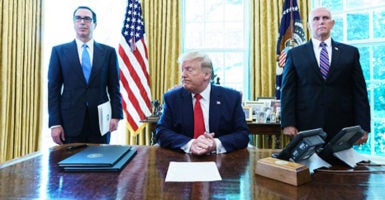 After pulling back from the brink of a military strike last week, the Trump administration is targeting the assets of Iran’s supreme leader, Ayatollah Ali Khamenei, along with his closest associates, through a new round of sanctions against the world’s biggest state sponsor of terrorism.

Iran shot down a U.S. surveillance drone last week over the Strait of Hormuz. President Donald Trump opted against a military retaliation because the drone was an unmanned aircraft.

Trump said he called off the strike because he was told it would likely kill 150 and that would have been disproportionate because there were no U.S. casualties in the drone’s downing.

In announcing the executive order, Trump said the new sanctions “will deny the supreme leader and the supreme leader’s office and those closely affiliated with him and the office access to key financial resources.”

Mnuchin announced that the United States would be freezing the assets of three top officials in the supreme leader’s inner circle, as well as five additional military leaders.

“The president has been clear about maximum pressure on the sanctions. That is our strategy,” Mnuchin told reporters. “And it’s not just him [the supreme leader]. It’s the leader’s office, which encompasses a whole range of activity.”

During an Oval Office announcement, before signing an executive order for more sanctions, Trump called the aggression by Iran “not good and not appropriate.”

“Today’s action follows a series of aggressive behaviors by the Iranian regime in recent weeks, including shooting down of U.S. drones,” Trump said of the sanctions after the June 13 attacks on two oil tankers near the Strait of Hormuz and on the drone.

The supreme leader of Iran is the one who ultimately is responsible for the hostile conduct of the regime. He is respected within his country. His office oversees the regime’s most brutal instruments.

In a vague reference to opting against a military strike, the president said, “These measures represent a strong and proportionate response to Iran’s increasingly provocative actions.”

But Trump was clear the U.S. would consider all options.

During an interview aired Sunday on NBC’s “Meet the Press,” Trump warned, “I’m not looking for war, and if there is, it’ll be obliteration like you’ve never seen before.”

The new sanctions were the right move at this point, said James Carafano, vice president for national security and foreign policy at The Heritage Foundation.

“Trump was smart not to go tit for tat with Iran,” Carafano told The Daily Signal. “Instead he slapped them with sanctions, something they really have no way to respond to.”