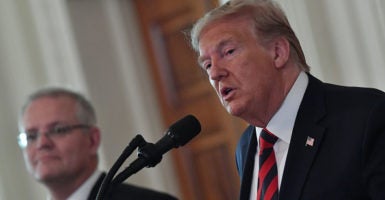 President Donald Trump said Friday that new sanctions on Iran’s national bank are the strongest ever placed on a country, but reiterated that he hopes to avoid military action against the Islamist regime.

“Nobody can beat us militarily,” the president said. “Nobody could even come close. What we’ve done for our military in the last three years is incredible.”

Iran is widely suspected to be behind the bombing of Saudi Arabian oil fields last week. Iran has denied involvement.

Trump responded to a question about whether the administration’s new action exhausts sanctions, and what other options short of military action the United States might take.

Before the press conference, Trump announced in the Oval Office that the United States has sanctioned the Iranian national bank.

Treasury Secretary Steven Mnuchin described the move as the strictest form of sanctions on Iran, one that will block any financial interaction between the Islamic republic’s central bank and a U.S.-related entity.

“We are continuing the maximum pressure campaign,” Mnuchin told reporters before the press conference, saying that Iran’s central bank—as well as its national development fund or wealth fund—“will be cut off from our banking system.”

“This will mean no more funds going to the [Islamic Revolutionary Guard Corps] to fund terror,” the treasury secretary said. “This is on top of our oil sanctions and our financial institutions sanctions.”

Australia’s Morrison said he and the president did not discuss Iran, but during the press conference he characterized the United States as having a “calibrated, I think, very measured response.”

Trump stressed that Iran has great potential if it would stop funding or otherwise supporting terrorism in other countries.

“These are the strongest sanctions ever put on a country. We are at a level of sanctions that is far greater than ever before with respect to Iran. We’ll see,” Trump said during the East Room press conference.

Trump said jumping into another military conflict would have been the easy route, given the U.S. military advantage.

“Going into Iran would be a very easy decision. Most people thought I would go in within two seconds, but, plenty of time,” Trump said.

“Iran could be a great country. It could be a rich country,” Trump said. “They are choosing to go a different way [and] they will be very sorry for that choice. I think I am showing great restraint. Some people respect it, some people don’t. I’m looking at what’s good for the United States. What’s good for our allies. It’s working out very well.”

The sanctions are a signal that the maximum pressure campaign will not change, said Jim Phillips, senior research fellow for Middle Eastern affairs at The Heritage Foundation.

“The new sanctions are significant but are unlikely to be decisive,” Phillips told The Daily Signal. “The important point that I think the administration is making  is that the pressure on Iran continues to mount and will not be relieved by the regime’s escalating challenges—only made worse.”