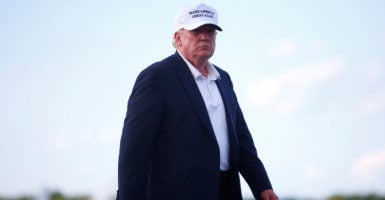 The first round of U.S. sanctions on Iran go into effect Tuesday, with another, more stinging round set to hit in November—reimposing restrictions that were lifted under the Obama administration-led nuclear deal with the Islamist regime.

President Donald Trump signed an executive order reimposing the sanctions Monday at his home in Bedminster, New Jersey, where he is vacationing.

In May, Trump pulled the United States out of the multilateral Joint Comprehensive Plan of Action, or JCPOA, reached in 2015. The president last week said he was willing to meet with Iranian President Hassan Rouhani without preconditions to negotiate a new nuclear agreement.

“As we continue applying maximum economic pressure on the Iranian regime, I remain open to reaching a more comprehensive deal that addresses the full range of the regime’s malign activities, including its ballistic-missile program and its support for terrorism,” Trump said in a statement announcing the sanctions. “The United States welcomes the partnership of like-minded nations in these efforts.”

This won’t be easy for Iran or the regime, said Richard Goldberg, senior adviser to the Foundation for Defense of Democracies, a Washington think tank.

“In the weeks ahead, the Iranian regime will come under enormous financial and political stress, with the people of Iran continuing to demand a government that invests in jobs and higher incomes, rather than terrorism and proxy wars,” Goldberg told The Daily Signal.

After the November sanctions on energy and Iran’s central bank, Goldberg said, “the mullahs will have to choose between fundamental behavioral change and regime collapse.”

“We can expect to see strong support for U.S. sanctions from our allies in the Middle East, compliance from our Asian allies, and reluctant compliance from European banks and insurers,” Goldberg added. “China is the biggest wild card, but it’s unlikely the party leaders in Beijing want to risk the economic consequences that would come with knowingly violating U.S. sanctions.”

As part of withdrawing from the nuclear deal, the Trump administration determined it would impose one set of sanctions in August and another set in November on energy and banking, based on a 90-day and 180-day wind-down period. The second set are made up of the primary international sanctions on Iran that existed before the Obama nuclear deal.

Effective 12:01 a.m. Tuesday, sanctions will be reimposed on the purchase of U.S. bank notes by the government of Iran; on Iran’s trade in gold and other precious metals; on graphite, aluminum, steel, coal, and software used in industrial processes; on transactions related to the Iranian currency, the rial; on activities relating to Tehran’s issuance of sovereign debt; and on Iran’s automotive sector.

As of Nov. 5, remaining sanctions go into effect on Iranian oil transportation, energy development, shipbuilding sectors, and the central bank of Iran. These could increase oil prices in the United States.

The sanctions could bring a significant political shift in Iran long term, said Christopher Garcia, a former deputy director at the Commerce Department, who dealt with international economic development.

“In the short term, Iran will try to patch things up through Russia and China financing,” Garcia told The Daily Signal. “In the long term, there is a very high possibility that the highly educated people in Iran facing economic hardship will be increasingly upset with the regime.”

“The goal is to change the Iranian government’s behavior, but if regime change is the consequence, we would not object to that,” he said.

In his formal statement, Trump said:

The [Joint Comprehensive Plan of Action]—a horrible, one-sided deal—failed to achieve the fundamental objective of blocking all paths to an Iranian nuclear bomb, and it threw a lifeline of cash to a murderous dictatorship that has continued to spread bloodshed, violence, and chaos.

Since the deal was reached, Iran’s aggression has only increased. The regime has used the windfall of newly accessible funds it received under the JCPOA to build nuclear-capable missiles, fund terrorism, and fuel conflict across the Middle East and beyond.

Since the president announced his decision May 8 to withdraw from the deal, the administration has sanctioned 38 Iran-related targets in six separate actions, according to the White House.

“We are already seeing some of the Iranian people voting with their pocketbook by moving money out of the currency, the rial, as it’s plummeting to the lowest point in history,” Jim Phillips, senior research fellow for Middle Eastern affairs at The Heritage Foundation, told The Daily Signal.

Iran will have a more difficult time funding the Syrian government of dictator Bashar Assad and funding the Houthi rebels in Yemen, Phillips said, but he doubts the Iranian government is likely to accept Trump’s offer for a meeting anytime soon.

“Knowing Iranians, they will wait until 2020 to see if there is a new president,” Phillips said.

Despite widespread dissatisfaction among the Iranian people, he said, the opposition isn’t unified enough for an uprising against the regime.

Last month, an Iranian diplomat was charged in a bomb plot in Paris, which will make Europe less likely to condemn the sanctions, Phillips said.

“I don’t think Europeans are eager to stick their necks too far out for Iran,” he said. “It’s only a matter of time before Iran is caught in another terrorist incident. It is a harder country to defend amid terrorism abroad and human rights abuses in their own country.”