Iran Re-Elects Rouhani as President. Here’s Why It Doesn’t Matter Much Who the Iranian President Is. 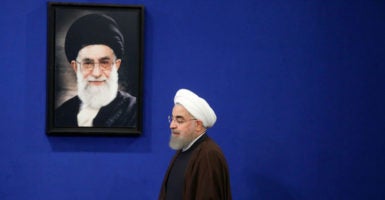 The election will change little in Iran. In Iran’s theocratic political system, elections advance the interests of mullahcracy, not democracy.

Iran’s clerical rulers claim legitimacy by purporting to be carrying out the will of God, not the will of the people.

Unlike in the U.S., Iran’s president is a political figurehead with very limited powers and responsibilities.

Iran’s supreme leader is the ultimate arbiter of the important issues, particularly those the United States is most concerned about: Iran’s nuclear program, its ballistic missile force, its export of terrorism, and its efforts to export its revolution to Bahrain, Iraq, Lebanon, Saudi Arabia, Yemen, and other places.

Iran’s theocratic dictatorship has constructed a façade of democracy to mask the fact that real power always has been wielded by unelected clerical leaders. It is the ayatollahs, after all, who approve which candidates are allowed to run for president.

This year, more than 1,600 male candidates announced plans to run for the presidency (women cannot run), but only six were approved by the Guardian Council, an Orwellian body that certifies that candidates reliably support the radical goals of Iran’s Islamic revolution.

The political process amounts to more of a selection than an election. The political campaign provides something of a barometer for measuring popular opinion, but it is still a small, self-perpetuating clerical elite that makes the critical decisions.

This year’s campaign focused primarily on economic issues. Many Iranians were disappointed when the lifting of economic sanctions as part of the 2015 nuclear deal did not trickle down to improve their lives—something Rouhani had promised.

This didn’t happen in part because Iran’s biggest trade deals were designed to benefit state-controlled industries and firms affiliated with the Revolutionary Guards, who control a large chunk of the Iranian economy.

Moreover, low oil prices have depressed Iran’s oil export revenues, which are the backbone of its economy.

The regime has exacerbated the situation by funneling many of the economic dividends provided by sanctions relief into a military buildup and an increasingly costly military intervention in Syria to prop up the brutal Assad regime.

Rouhani has little control over those decisions, which are made by Khamenei.

In reality, Iran’s election on Friday was a charade. All it did was reselect Rouhani as president—a president in name only.

Khamenei, who has ruled Iran since 1989, reportedly has suffered from prostate cancer in recent years.  The selection of his successor will have a greater impact on Iran’s future than the selection of any president.