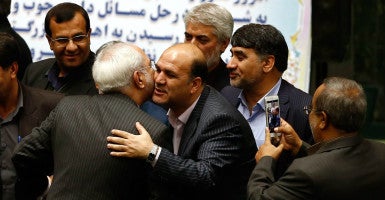 “Implementation day” of the nuclear deal among Iran, the U.S., and five other world powers came and went on Saturday after international inspectors confirmed that Tehran had fulfilled the terms of the agreement.

The implications of the deal will play out over many years, as nations watch what Iran makes of itself now that Tehran has restrained its nuclear ambitions in order to be freed from punishing sanctions.

“It’s all on Iran to either reform itself, or not,” said Richard Nephew, a former State Department official who served as the lead sanctions expert for the U.S. team negotiating with Iran. “Candidly, we don’t know the answer to it.”

While Iran’s future actions are unknown, the impact of the sanctions relief on Tehran is immediate.

Iran has access to $100 billion in frozen oil revenues, although experts say roughly half of that money is already obligated.

After being freed of U.S.- and European-imposed oil and financial sanctions, Iran can participate in the international banking system and can sell as much oil as it wants.

But Iran is still barred from using the U.S. banking system, and the collapse of oil prices means Tehran will see less revenue from its sales—and it risks lowering prices further if it gluts the market.

Due to a U.S. trade embargo on Iran, Americans cannot sell goods and services to the country, and vice versa. There are exceptions. Foreign subsidiaries of U.S. companies can do business with Iran, with some restrictions.

In addition, American companies can sell civilian aircraft to Iran, and the U.S. permits imports of certain Iranian products, like carpets, caviar, and pistachios, the New York Times reports.

To put it simply, Nephew told The Daily Signal, the sanctions that impacted sectors of Iran’s economy and industry have largely been removed, but some significant people and groups remain sanctioned, including the Iran Revolutionary Guards Corps.

Add it all up, and Iran has been greatly relieved from external pressure.

Iran’s first priority under its newfound freedom will be to improve its economy at home, experts say.

“The no. 1 thing Iran is going to do with its returned assets is shore up the economy, investing in energy infrastructure and social infrastructure in general,” said Alireza Nader, a senior international policy analyst at the RAND Corporation who focuses on Iran. “Generally, I think there will be boost for the economy, but I am not sure the average person will benefit immediately. If anything, the regime and associated businesses and companies will be the most immediate beneficiary.”

In a letter Tuesday to his country’s moderate President Hassan Rouhani, Iran’s Supreme Leader Ayatollah Ali Khamenei wrote that the government must use the lifting of sanctions to create an “economy of resistance.”

He said lifting sanctions alone is “not enough for improving the economy of the country and living conditions of the people.” Experts took that as a warning to Rouhani and the moderates of Iran who want to use its financial freedom to bolster its economy.

Iran’s parliamentary elections are Feb. 26, and the country’s Guardian Council, a conservative committee of clerics and jurists, has blocked most reformist-minded candidates from running.

“I am looking for what happens with the parliamentary elections to see what direction Iran goes after the implementation of the nuclear deal,” Nader told The Daily Signal. “If Rouhani can’t get his people into parliament, it shows that while the Iran deal may improve his popularity, it may not translate to political capital within the system.”

An empowered regime is worrisome, says Emanuele Ottolenghi, a senior fellow and sanctions expert at the Foundation for Defense of Democracies.

“The bottom line is, this deal will help the Iranian economy recover, and the regime wants to use that to bolster its internal legitimacy,” Ottolenghi told The Daily Signal. “It will not allow anything to undermine what it sees as its crowning achievements—asserting itself in the world as a counterbalance to what it sees as Western-imposed international order.”

Jim Phillips, an expert on the Middle East at The Heritage Foundation, argues the hardliners in the regime will use the sanctions relief to expand its influence in conflicts where it is already present.

“The sanctions relief afforded to Iran under the nuclear deal will expand Tehran’s power and influence, tilt the regional balance of power in its favor, and give it more resources with which to attain regional hegemony,” Phillips told The Daily Signal. “It is likely to take an even harder line on the Syrian crisis, where it is propping up Bashar al- Assad’s beleaguered dictatorship. In Syria and Yemen, Iran has escalated the fighting, not pushed for a diplomatic solution.”

Nephew and Nader, on the other hand, contend the costs of intervening in those conflicts is relatively small, so Iran is unlikely to dramatically bolster its forces in places like Syria just because it has more money.

“A lot of people look at this and say Iran will take all of that money and move it directly to Assad and solve all his problems,” Nephew said. “But they have not showed they are unwilling to support Assad during the sanctions regime. What they haven’t been able to do is the normal economic things they wanted to do.”

Nephew, who worked on the Iran sanctions issue from 2011 to 2015, acknowledges President Barack Obama took a risk by pursuing the Iran deal. But he insists Obama’s expectations were to limit Iran’s nuclear ambitions, and that anything extra, such as regime change, would be gravy.

“I see him as a cold-eyed realist on this,” Nephew said. “The circumstances the way they were going [under sanctions] was not leading to success, so we at least now have a chance at better outcome on the nuclear issue in 15 years’ time. I think what he thought is that it’s worth it to see whether, in this atmosphere, Iran can change. If not, you review your options and go in a different direction.”