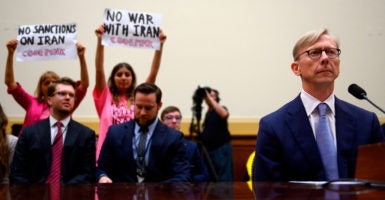 “It’s impossible to support my family, anymore, living in Iran,” said Heidari, who is from the Iranian city of Kermanshah.

“Coming here was my last option,” Heidari said of the autonomous Kurdish territory in northern Iraq.

Speaking with this correspondent during a shared taxi ride between the Iraqi cities of Sulaymaniyah and Erbil in late May, Heidari explained that he now makes the mountainous border crossing into Iraqi Kurdistan on a regular basis.

Heidari stays for months at a time, sending the money he makes back to his family in Iran.

Iran shot down a U.S. drone Thursday, escalating an ongoing military standoff that many experts warn could lead to full-scale war.

“It was a very foolish move,” President Donald Trump told reporters at the White House early Thursday afternoon, while indicating the shootdown may have been “a mistake” by an Iranian military leader.

Even so, Trump said, “This country will not stand for it.”

The president announced Monday that 1,000 more American troops were headed to the Middle East. The move followed an attack on two oil tankers in the Gulf of Oman last week, which U.S. officials attributed to Iran.

Although both camps have said they don’t want war, many experts say the prospect of an accidental conflict is increasing.

As U.S. sanctions take a toll on Iran’s economy and military tensions mount between the two countries, an uptick has occurred in the number of Iranians traveling to Iraqi Kurdistan. Some are looking for work. Others want to wage war on Tehran’s theocratic government.

“The young people in Iran are looking for an opportunity to stand up and overthrow the government,” said Shaista Mohammed, 19, a female Kurdish Iranian who is a peshmerga fighter.

She left Iran eight months ago to join an exiled Kurdish opposition group based in Iraqi Kurdistan called the Organization of Iranian Kurdistan Struggle.

“Most young people in Iran think that the sanctions will bring down the regime,” Mohammed said. “The U.S. sanctions have helped our cause. If the people feel like they have the support of the U.S., there’s a very good chance of revolt.”

The U.S. withdrew from the 2015 nuclear agreement with Iran in May 2018. Since then, renewed American sanctions have targeted Tehran’s financial and industrial sectors and more than halved the Islamist regime’s daily oil exports, to around 1 million barrels.

Inflation is about 30%, and Iran’s government deficit has widened to a record 62% shortfall in revenue. In short, Tehran is running out of cash while inflation is accelerating.

Heidari said he is worried that a war between the U.S. and Iran would close the border into Iraqi Kurdistan, sealing him off from the essential economic lifeline he needs to support his family.

“If the U.S. attacks Iran, it would be a disaster,” Heidari said.

From their fortified redoubts in Kurdish-controlled northern Iraq, a network of armed and exiled Kurdish Iranian opposition groups have waged an on-again, off-again guerilla insurgency in Iran for decades. Their goal is to overthrow Tehran’s ruling mullahs and establish an autonomous Iranian Kurdistan.

The leaders of these opposition groups say the number of young Kurdish Iranian recruits who make a dangerous journey across the mountainous border into Iraqi Kurdistan has spiked over the past year, underscoring how renewed U.S. sanctions have boosted the fervor of an anti-regime movement among Iran’s Kurdish minority.

“We’ve seen a huge increase in young peshmerga from Iran joining our group in the past year,” said Kako Alyar, 34, a peshmerga fighter and head of the Central Committee Secretariat of the Komala Party of Iranian Kurdistan, an opposition group.

“Due to U.S. sanctions, the economic situation is very bad, but the hope for regime change has increased,” Alyar said. “We have daily contact with people inside Iran, and I’m sure that America will receive huge support from young Iranians, especially among Kurds.”

About 7 million Kurds currently live in Iran, predominantly within a swath of northwestern territory called Rojhelat, which comprises about 10% of the country’s overall landmass.

Kurds from this region describe a police state in which Iran’s Islamist regime has enforced draconian measures to stifle the long-simmering Kurdish rights movement.

“We’re witnessing an increase in the recruitment of young peshmerga from Iran into our ranks,” said Asso Hassan Zadeh, deputy secretary general of the Kurdish Democratic Party of Iran, an opposition group based in the town of Koya in Iraqi Kurdistan.

“The young people just want a better life,” Zadeh said. “They want to live in a place where they can be free—or at least be able to fight for their freedom. If America attacks, an uprising could happen. But Iranians need to know that they have U.S. backing—in Iran, the price of an uprising is very high.”

“Trump has increased U.S. power in the region,” said Babeshex Husaini, 54, secretary general of the Organization of Iranian Kurdistan Struggle, the opposition group based in the town of Topzawa, just outside Erbil, the capital of Iraqi Kurdistan.

Husaini said he was disappointed in the Obama administration’s nuclear agreement with Tehran, known as the Joint Comprehensive Plan of Action, or JCPOA. The battle-hardened peshmerga commander, who says he has survived roughly 60 assassination attempts by Iranian forces, lauded Trump’s decision to withdraw from the 2015 nuclear deal and renew the sanctions on Iran.

With the Iranian regime’s hold on power weakened by U.S. sanctions, Husaini said U.S. military strikes could incite a revolution—but only if the targets are exclusively military in nature.

“The Iranian people are ready for a revolution,” Husaini said, adding:

“As a Kurd, as a Muslim, as someone from the Middle East, I support Trump,” Alyar said. “You see, you have to show dictatorships, like the one in Iran, that you have the power. Based on our experience, if you show weakness, they will attack you. You have to show them muscles … we respect a strong leader.”

As Iran’s economy tanks, the Kurdistan Laborers Syndicate has sounded the alarm about a projected spike in migrant workers coming from Iran and potentially taking jobs away from Kurdish workers.

“Due to the second round of U.S. sanctions on Iran and the possibility of worsening living conditions, we predict thousands of Iranian laborers will turn to the Kurdistan Region,” said Sabir Othman Ali, head of the workers syndicate’s office in Erbil.

Iraqi Kurdistan is a self-governing enclave with its own government, budget, immigration rules, and military forces.

Migrant work in this autonomous Kurdish region has been a financial lifeline for Iranians for years. Sulaymaniyah, Iraqi Kurdistan’s second-largest city, is only a 90-minute drive from the Iranian border.

The 2015 nuclear deal, however, eased Iran’s economic woes and spurred many Iranians living in Iraqi Kurdistan to head back home, according to news reports at that time. The U.S. withdrawal from the deal, and the renewal of sanctions, reversed that trend, Kurdish officials say.

In 2018, Iraqi Kurdistan reported a 10% increase in registered foreign workers. The majority of the new workers were from Iran, the Kurdistan Laborers Syndicate said in a statement.

To soften the economic blow of the sanctions, Iran is working to boost trade and loosen its immigration rules with Iraqi Kurdistan, allowing the free flow of goods, workers, and tourists.

Iranian officials have made sweeping overtures to the Kurdistan Regional Government to increase the ease of trade and travel. In January, Iranian officials announced tax breaks and other financial incentives for Iranian citizens to do business in the autonomous Iraqi Kurdistan region.

Iran also has made moves to draw more visitors from Iraq. Tehran agreed in March not to stamp the passports of Iraqis traveling to Iran, a move meant to ease fears that an Iranian stamp on one’s passport could complicate future trips to Western countries due to the ramped-up U.S. sanctions.

In 2018, the Iranian consulates in the Kurdish cities of Erbil and Sulaymaniyah reportedly gave a half-million visas to residents of Iraqi Kurdistan. In 2019, Iranian officials expect that number to increase to 800,000.

More trade and easier immigration with Iraqi Kurdistan won’t right Iran’s floundering economy, nor will such measures offset the punishing effect of U.S. sanctions. But these moves could allow Iranians living near the border region to make some extra cash, mitigating, in some small measure, the domestic backlash against Tehran for the economic downturn—and a potential war with the U.S.

Farhad Safaei, an Iranian oil trader from the Iranian city of Kermanshah, told The Daily Signal that it was easier to cross the border into Iraqi Kurdistan now under the new immigration rules. To make ends meet, Safaei said he had “no other choice” but to look for work in Iraqi Kurdistan. He says he is worried, though, that a war could close the border.

“The last thing anyone wants is a war,” Safaei said. “All the Iranian people would suffer.”