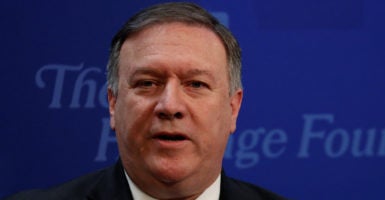 “Iran will not have carte blanche to dominate the Middle East,” Secretary of State Mike Pompeo says during remarks on the Trump administration's Iran policy Monday at The Heritage Foundation in Washington. (Photo: Jonathan Ernst/Reuters/Newscom)

Secretary of State Mike Pompeo gave Iran’s government an ultimatum and its people an assurance Monday in laying out the Trump administration’s agenda after pulling out of the 2015 nuclear deal with the Islamist regime.

“The Iranian wave of destruction in just the last few years is proof that Iran’s nuclear aspirations cannot be separated from the overall security picture,” @SecPompeo says.

“The sting of sanctions will be painful if the regime does not change its course from the unacceptable and unproductive path it has chosen to one that rejoins the league of nations,” Pompeo, shy of a full month on the job, said at The Heritage Foundation, warning Iran’s leaders that the “strongest sanctions in history” are coming.

“The regime has been fighting all over the Middle East for years. After our sanctions come in force, it will be battling to keep its economy alive,” said Pompeo, a former Army officer and congressman from Kansas who the Senate confirmed April 26 as the nation’s chief diplomat after he served more than a year as director of the Central Intelligence Agency.

“Iran will be forced to make a choice: Either fight to keep its economy off life support at home or keep squandering precious wealth on fights abroad. It won’t have the resources to do both,” Pompeo said.

The United States will work to deter Iranian aggression and to stop the regime’s funding of terrorist groups such as Hamas and Hezbollah, the secretary of state said during his remarks at Heritage’s Capitol Hill headquarters.

“Iran will not have carte blanche to dominate the Middle East,” Pompeo said.

On May 8, President Donald Trump withdrew the United States from the multilateral Iran nuclear deal, formally known as the Joint Comprehensive Plan of Action, or JCPOA.

The other partners in the 2015 agreement crafted by President Barack Obama’s administration were the four other permanent members of the United Nations Security Council: Britain, France, China, and Russia. Since Germany was also part of the deal, the group of nations was known as P5+1.

Pompeo noted that Obama and his second secretary of state, John Kerry, argued in 2015 that the nuclear deal would stabilize the Middle East.

But, he said, “Iran continues to be, during the JCPOA, the world’s largest sponsor of terror.”

Since the agreement went into effect, Iran has continued funding terrorism in Lebanon, Iraq, Yemen, and Afghanistan, among other areas, Pompeo said.

“The Iranian wave of destruction in just the last few years is proof that Iran’s nuclear aspirations cannot be separated from the overall security picture,” he said.

Pompeo also said the United States would “tirelessly advocate” for the Iranian people, pointing to the protest last winter:

Iranians are angry at a regime elite that commits hundreds of millions to military operations and terrorist groups abroad, while the Iranian people cry out for jobs, opportunity, and liberty. The Iranian regime’s response to the protests has only exposed that the country’s leadership is running scared. Thousands have been jailed arbitrarily, and at least dozens have been killed.

The 2015 agreement gave the Islamist regime the opportunity to “boost the economic fortunes of a struggling people,” Pompeo said.

Under the Iran deal, the United States unfroze $150 billion in Iranian assets in 2015. The following year, the Obama administration transported $1.7 billion in cash to Iran, describing it as a settlement over an arms control agreement. The sanctions relief allowed additional money to flow into the country.

Pompeo said the United States is open to future diplomatic and economic ties with Iran, but first said it must comply with specific demands, among them:

“What we are pursuing was the global consensus before the JCPOA,” Pompeo said.

The 2015 Iran nuclear deal, led by the Obama administration, lifted sanctions in exchange for Iran’s delaying development of a nuclear arsenal for 10 years.

“In contrast to the previous administration, we want to include Congress as a partner in this process,” Pompeo said. “We want our efforts to have broad support with the American people and endure beyond the Trump administration. A treaty is our preferred way to go.”

“I’ll concede, there are American companies who would love to do business with the Islamic Republic of Iran. There is a huge market there. It’s a big, vibrant, wonderful people. But everyone is going to have to participate in this. Every country is going to have to understand that we cannot continue to create wealth for Qasem Soleimani,” Pompeo said, referring to a dominant Iranian military leader.

For a transcript of Pompeo’s appearance at Heritage, go here.