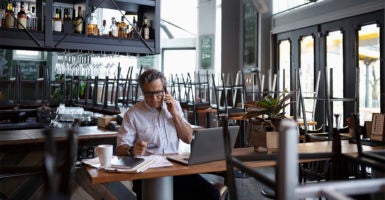 Susan Kochevar, owner of the 88 Drive-In Theater in Commerce City, Colorado, shared how her business was impacted by a state mandated minimum wage increase.

“I was looking forward to expanding and offering more low-cost entertainment and more jobs to young people, but my state, in 2017, passed a minimum wage amendment,” she stated. “The minimum wage goes up 90 cents for the next three years. This is a huge cost to small businesses.”

Kochevar added how she is paying her employees more than the new minimum wage.

“In Colorado, we’re going to $12 an hour, but it’s not just a $12 increase. Social Security and Medicare are a percentage of payroll, and employers match that so it’s really more than $12 an hour I’m paying,” she said. “We’ve already lost a few Colorado businesses due to the minimum wage increase.”

Joseph Semprevivo, the CEO and president of Joseph’s Lite Cookies in Sebastian, Florida, drew attention on the call to how the coffee shop that once employed Rep. Alexandria Ocasio Cortez, D-N.Y., shut down mostly due to New York’s minimum wage increase, which Ocasio-Cortez supported.

“When the minimum wage went into effect, taxes had huge consequence on business,” he said

The business owner described the lack of optimism for the economy two years prior to Trump taking office.

“We were really concerned about whether we’ll be in business next year or not. We were so concerned with the regulatory tax environment and the anti-small business, middle-class mentality that was in the Obama administration,” Semprevivo said.

Due to the federal tax cuts passed in 2017, Semprevivo said he was able to give raises to his team members of up to $5,250.

“One of my team members, Mike, started to cry and said he’s going to buy a car for his two little girls,” he said.

Semprevivo expounded on the impact of the tax cuts on a larger scale:

I stepped back and thought about Mike. He bought a car from Michigan, made by a union member in Michigan, that went on to a truck that was transported to the state of Florida. The trucker got paid, the salesperson got commision, the dealership made money, and then you look at the tire company and the assembly and all that. All of these people got paid.

Both Kochevar and Semprevivo were previously profiled by The Daily Signal.

Dina Rubio, a veteran of the restaurant business for more than two decades who owns Don Ramon Restaurant in West Palm Beach, Florida, raised concerns about how prices for low-profit products such as beans and rice will be impacted by increased labor costs.

“If labor costs increase, that will be something I’m not sure how we’ll be able to manage until we know more about it and what they’re thinking of doing because that will really affect my business as a restaurant,” she said, adding, “In hard times, my team, my workers, are the most important thing, and we have to cut our earnings in order to pay them first.”

Ortiz closed the call with criticisms of Democrats as “duplicitous” regarding their concern for the government shutdown’s impact on small business owners.

“On the other hand, they’re introducing these federally mandated minimum wage increases that are sure to hurt small business owners across the country. At best, [the Democrats] are duplicitous in terms of what they say and what they do,” Ortiz said.