Unions Are Utterly Shameless. Here’s the Real Story Behind Their Minimum Wage Campaign. 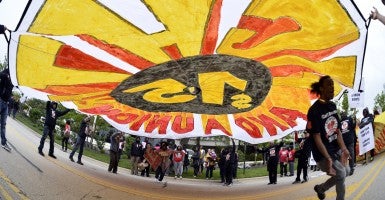 Protesters demonstrate in front of McDonald's corporate headquarters demanding a wage increase to $15 per hour on May 20, 2015, in Oak Brook, Ill. (Photo: Brian Kersey/UPI/Newscom)

Utterly shameless. There really is no other way to describe what some unions are trying to pull when it comes to the minimum wage.

The issue, of course, has been in the news quite a bit lately, especially in Los Angeles, with supposedly incensed workers waving their “Fight for 15” placards. It’s all perfectly packaged for the media, an alleged David versus Goliath fight. Will those mean ol’ fast-food joints and other stingy employers finally start paying a “living wage”? Tune in for the dramatic video.

Never mind that a substantial hike in the minimum wage would price many unskilled workers right out of the market. Goodbye, entry-level jobs for men and women who will later become workers making a much better wage at a job with more responsibilities.

And never mind how this minimum wage hike would make the price of fast food soar. A huge part of the draw for fast food, after all, is the fact that it’s relatively cheap. Take that away, and now it’s goodbye to the industry, which, of course, will hardly help the workers who are supposed to benefit from the wage increase.

Employers, after all, don’t have a bottomless safe in the backroom from which to pull vast reserves of cash for these salaries. They’ll react by cutting hours, for one thing. Labor expert James Sherk, for example, found that raising the minimum wage to $15 would cause a 36 percent drop in hours worked in fast food.

Think of what such a hike would mean for a major city such as Los Angeles. “If the effects are the same for all low-wage food-service occupations,” writes economist Salim Furth, “the ‘Fight for 15’ will cost more than 20,000 Angelenos their jobs in those occupations alone.” We can expect the same type of effect everywhere if such a drastic hike is enacted.

Of course, we don’t hear about any negative effects from much of the media or from breathless proponents of such “wage equality.” Or if we do, the effects are shrugged off as the scaremongering tactics of employers who just don’t want to pay up.

But it’s harder to ignore the fact that the same Los Angeles unions who campaigned so hard and so successfully for a $15 minimum wage want unionized companies to be exempted from the new requirement.

As Rusty Hicks, head of the Los Angeles Federation of Labor, told the Los Angeles Times: “With a collective bargaining agreement, a business owner and the employees negotiate an agreement that works for them both. The agreement allows each party to prioritize what is important to them. This provision gives the parties the option, the freedom, to negotiate that agreement. And that is a good thing.”

A new low in hypocrisy? Oh, no. It’s even worse than that.

Yes, it’s outrageous to hear Hicks extolling the virtues of a flexible system that allows both sides to negotiate a mutually acceptable arrangement—the same system he would deny to others. But there’s an even more cynical reason Hicks and the unions want this “good thing” all to themselves.

“They have another reason to seek this exemption,” writes Sherk. “It would boost their membership. An exemption would enable unions to offer businesses lower wages in exchange for unionizing.”

This isn’t just speculation. Unions have already pulled this tactic in Long Beach, Calif., and Milwaukee. They agitate for a “living wage,” then get the city in question to exempt unionized companies. That motivates non-union companies to unionize—so they can escape the high wage costs that unions just helped slap on everyone else.

So remember that the next time certain unions are out there pounding the drums (often quite literally) for those allegedly downtrodden workers. The only coffers they’re really looking to fatten are their own.