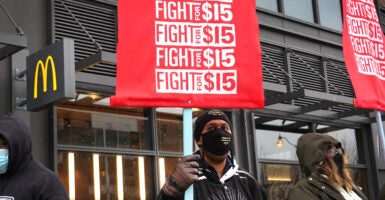 Demonstrators protest outside of McDonald's corporate headquarters on Jan. 15 in Chicago as part of a nationwide effort calling for the national minimum wage to be raised to $15 per hour. But restaurant owners and tipped employees warn that such legislation would devastate the hospitality industry. (Photo: Scott Olson/Getty Images)

Restaurant owners and tipped employees alike are expressing concerns over a proposal to raise the national minimum wage to $15 an hour, with one going so far as to say it would amount to a “death knell” for the restaurant industry.

President Joe Biden has called for a $15 an hour minimum wage in his “American Rescue Plan,” including an end to the tipped minimum wage.

But three restaurant industry stakeholders warned in an online forum held Tuesday by The Heritage Foundation that restaurants could be forced out of business for good by such a large increase in the minimum wage from the current $7.25 an hour for most employees and $2.23 hourly for tipped workers.

In the webinar, “The Faces of a $15 Minimum Wage,” Betsy LeRoy, owner of Pizza by Elizabeths in Wilmington, Delaware, called out the president’s plan to raise the base wage over four years.

LeRoy said she has served Biden, a resident of Delaware, in her restaurant many times and voted for him, but added, “This is not the time for a federally mandated minimum wage [increase]. … The unintended consequences of this are far-reaching.”

LeRoy said if she had to pay every entry-level employee $15 an hour, then she would also need to raise the wages of employees who have worked for her for years and earn more than the entry-level workers, just to keep them ahead. The increased cost of labor would force LeRoy to have to lay off some of her employees.

“I am a business owner that loves to pay people more, and if you ask any of my employees, they will tell you that’s true,” she said.

“The president and his team may understand Delaware politics, but I’m not sure they understand the difficulties of Delaware restaurants. How else to explain his proposal to raise the minimum wage for our servers and bartenders from $2.23 an hour to $15—an increase of more than 400%—which would be a death knell for our industry?” LeRoy wrote in a Feb. 5 op-ed in The Wall Street Journal.

The restaurant industry is already struggling under capacity restrictions imposed by local and state governments to combat COVID-19. As of early December, a National Restaurant Association survey estimated that “17% of restaurants—more than 110,000 establishments—are closed permanently or long-term.”

“Something that is unique to the restaurant industry is that it is one of the few jobs left where you don’t have to have a college education, and English doesn’t even have to be your first language,” she said, noting that many of those who would likely lose their jobs as a result of the minimum wage increase proposal would be the poor and the working class.

Valerie Torres, a professional bartender, board member of the Restaurant Workers of America, and member of the D.C. Tipped Workers Coordinating Council, spoke of the attacks she has been subject to as a result of speaking out against an increase in the minimum wage.

“[W]hen we as workers came out to fight for ourselves, then their response was to attack us … accusing us of being paid corporate shills, or paid actors, or that we were being threatened by our employers to come out and fight for the system that only benefited the … employers and not the workers,” she said.

Torres said the increase in the minimum wage would also lead to restaurants raising their menu prices, which would discourage consumers from dining out as often as they do now.

“[Y]ou can’t just magically … make money appear. … The money’s going to come from somewhere. … There’s only so much you can raise your prices before you price yourself out of the market altogether, before people just don’t want to spend that much money,” she said.

A study released Monday by the nonpartisan Congressional Budget Office estimated that a $15 an hour minimum wage could increase wages for 27 million workers and lift 900,000 Americans out of poverty, but it would also eliminate 1.4 million jobs over the next four years.