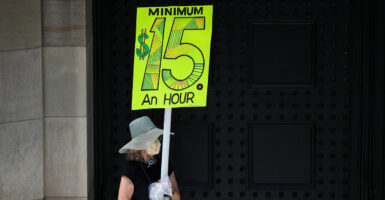 The Raise the Wage Act of 2021, which would incrementally increase the federal minimum wage from its current level of $7.25 per hour to $15 per hour in June 2025, would result in at least 1.4 million, and potentially 2.7 million, job losses, the Congressional Budget Office has found. Pictured: Protesters call for a $15 minimum wage outside of the Federal Reserve Bank in New York in July. (Photo: Tayfun Coskun/Anadolu Agency/Getty Images)

Rising incomes are a great thing, and it would be wonderful if all jobs paid at least $15 per hour. After all, that would reduce government welfare spending and give people more freedom and greater financial security.

Hence liberal lawmakers’ Raise the Wage Act of 2021 (S. 53), which would incrementally increase the federal minimum wage from its current level of $7.25 per hour to $15 per hour in June 2025.

>>> VIRTUAL EVENT: “The Faces of a $15 Minimum Wage.” Hear from everyday Americans about how a $15 federal minimum wage would affect them and their businesses. Watch here.

Before pushing ahead with their naïve, populist $15 minimum wage agenda, policymakers should take heed of the CBO’s report. While it refers to billions of dollars and millions of workers, these figures represent the incomes and livelihoods of actual workers, families, and small businesses in their states and districts.

The CBO estimated median job losses of 1.4 million and noted that losses are “unlikely to be much lower,” but “could be much higher”—potentially 2.7 million or more lost jobs. It’s important to note that these job losses don’t include losses already estimated to occur because of separate state and local wage increases, such as Florida’s recent passage of a $15 minimum wage.

Jobs lost to the minimum wage—by way of companies going out of business, automating low-wage jobs, or off-shoring them—won’t come back.

At $15 per hour, individuals who cannot yet produce at least $36,000 (the cost to employers, including taxes, of a full-time employee making $15 per hour) will find it hard to get their foot in the door and gain the experience to move up the income ladder.

The CBO explained that, early on, most workers who lost jobs would still be looking for work, but by 2025, “half of the 1.4 million people who would be jobless because of the bill would have dropped out of the labor force,” with “young, less educated people” disproportionately pushed out of the labor market.

Some individuals with disabilities and older workers would also withdraw from work because a $15 minimum wage “would induce some workers with serious health conditions to claim disability benefits and some older workers to claim retirement benefits earlier than they would have otherwise.”

As the CBO report notes, “Spending for unemployment compensation would increase under the bill because more workers would be unemployed.” Thus, “[states would] increase their tax revenues to maintain a positive balance in their unemployment trust funds.”

For workers who lost jobs and employment opportunities because of a $15 minimum wage, unemployment insurance would be a wholly inadequate support.

Grocery store profit margins average 1% to 3% while restaurants average 2% to 6%, and according to payscale.com, the average income for a small business owner is $69,000. That doesn’t leave much room for pay hikes without subsequent price hikes.

As the CBO report explained, “Higher wages would increase the cost to employers of producing goods and services. Employers would pass some of those increased costs onto consumers in the form of higher prices, and those higher prices, in turn, would lead consumers to purchase fewer goods and services,” leading to employers cutting jobs and resulting in a smaller economy.

One consequence that proponents of the $15 minimum wage may not have thought through is its impact on the already expensive cost of child care. In a forthcoming report, I estimate that the cost of child care could rise by thousands of dollars per year for families.

The bill would cause the amount of capital—buildings, vehicles, machines, equipment, and tools, including technology—to decline.

That’s significant because capital and education (including experience) are the two keys to workers becoming more productive and thus earning higher incomes.

Consequently, the CBO reported that the “reduction in investment would reduce workers’ productivity and lead to further reductions in their employment.”

The CBO report estimates that pay will rise by $509 billion for workers who are employed at higher wages, but will fall by $175 billion for those who have less or no employment because of a $15 minimum wage.

While on net, a $333 billion increase seems like a positive outcome, policymakers shouldn’t be in the business of picking winners and losers—especially when the consequence is lost incomes and jobs for those most in need.

The CBO report confirms what economists, employers, and even households know to be true—you can’t create something out of nothing. The only way to generate true and lasting wage gains is for workers to become more productive through education and technological advancement.

Rather than supporting measures like a $15 minimum wage that might sound good but would actually be destructive, policymakers should seek policies that help generate real income gains.

Expanding alternative forms of education, such as apprenticeships; reducing unnecessary regulations so that businesses can invest more in workers; and opening doors to entrepreneurial opportunities for lower-income workers by reforming occupational licensing requirements and allowing all types of workers the freedom to contract are just a few ways to generate income gains that don’t hurt others.