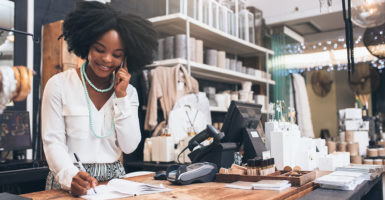 Today, occupational licensing covers nearly 30% of the U.S. workforce, up from 5% in the 1950s. (Photo: Squaredpixels/Getty Images)

Karin Lips is the president of the Network of Enlightened Women, a senior fellow with Independent Women’s Forum, and the editor of “She’s Conservative: Stories of Trials and Triumphs on America’s College Campuses.”

Arizona Republican Gov. Doug Ducey recently signed into law a bill that makes the Grand Canyon State the nation’s first to broadly recognize occupational licenses from other states for people licensed for at least a year in another state.

The change is a win for working women and everyone who wants the option of moving to another state and finding a job.

“House Bill 2569 is a common-sense reform that will help expand economic opportunity by making it easier for people to move to Arizona to further their careers,” said Paul Avelar, managing attorney of the Institute for Justice Arizona Office.

Under traditional state licensing regimes, individual states require people to meet certain, specific requirements in order to get a license to practice an occupation, so moving across a state line requires a new license.

Thanks to Arizona’s new law, workers licensed in one state will have an easier time if they move to Arizona. The law applies to athletic trainers, barbers, cosmetologists, funeral directors, massage therapists, nurses, and real estate agents, among others.

This is simply good policy—after all, massage therapists don’t forget how to give massages when they cross state lines, and presumably passing state requirements in one state is enough to protect the public health and safety in another.

This blow against needless red tape is a win for economic mobility. Occupational licensing requiring education, training, exams, and/or fees makes it more costly to move to another state and continue working.

For those who don’t have a choice, it means they have to give up work.

Take active-duty military spouses, 93% of whom are female. Military families move an average of once every three years.

Careers that demand families move on short notice or move frequently make it hard for anyone to maintain a career. For those who work in careers that require licenses, the cost can be prohibitive and make working next to impossible.

Some state legislatures have addressed this issue for military spouses through temporary licensure or just requiring a current license in another state and fees.

But this step is not enough. Unnecessary occupational licensing requirements should be repealed.

Occupational licenses are justified as a means to protect the public health and safety. In some cases, they serve this purpose. But often, occupational licensing requirements are primarily barriers to entry meant to limit competition to existing workers and businesses.

Some licensing requirements are clearly ridiculous.

To become an interior designer in Louisiana, for example, an applicant must: complete six years of post-high school education and training, such as graduating from an interior design program of four years and completing two years of “interior design experience”; pass the National Council for Interior Design Qualification exam, which costs more than $1,000; and pay a $150 licensing fee.

In contrast, Louisiana only requires EMTs pay $110 in fees, complete 110 hours of education, and pass two exams to get a license. It’s clear that it isn’t public safety that is dictating licensing policies in Louisiana.

If a woman who is talented in design can’t become an interior designer, she might try to become a florist, but that’s not an easy task in Louisiana either.

Louisiana is the only state that requires florists to obtain a license. The state eventually ended the practical part of its exam, which, as Shoshana Weissmann and C. Jarrett Dieterle explained in USA Today, involved subjective judgment of bouquet arranging.

Data USA found 71% of workers in the retail florists industry group are women.

In addition to being unfair to individuals seeking to find employment or start a small business, overregulation through state occupational licensing negatively affects the economy.

Overall, occupational licensing may cost the economy more than $183 billion each year in misallocated resources, according to a 2018 Institute for Justice report.

Rolling back state occupational licensing doesn’t have to be a partisan issue.

In April, former Vice President Joe Biden said,“Why should someone who braids hair have to get 600 hours of training? It makes no sense…They’re making it harder and harder in a whole range of professions, all to keep competition down.”

Arizona’s move should be the first step in rolling back licensing requirements that are needlessly costly, time-intensive, and, in many cases, have no demonstrative purpose besides keeping competition out.

This is a women’s empowerment agenda that everyone should get behind.