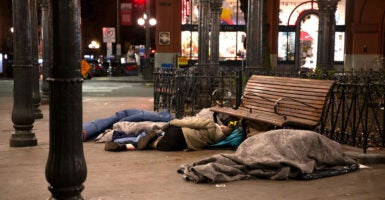 People sleep outside on a sidewalk on April 6 in Seattle, Washington. After the Seattle City Council voted to increase the minimum wage to $15 in 2014, homelessness in the city dramatically surged. (Photo: Karen Ducey/Getty Images)

Imagine that your monthly mortgage payment suddenly increased by 50%. And that it happened now, in the wake of COVID-19-related job and income losses.

That’s what some policymakers are now suggesting lawmakers should do by raising minimum wages at the worst possible time. As unemployment is high, many jobs have disappeared, and the lowest-wage industries, such as restaurants and hotels, have already experienced significant business failures. Many that remain are struggling just to stay afloat.

Lower-wage industries have been the hardest hit.

According to a recent survey by Yelp, 35% of shopping and retail establishments—9,682 stores in total—had closed their doors for good as of June 15.

And 53% of restaurants—12,710 in total—had shut down permanently. Even many larger chain restaurants have shuttered their doors for good.

For a restaurant with five full-time workers making minimum wage, a doubling of the federal minimum wage from $7.25 to $15 would mean an $85,800 wage increase. With low restaurant profit margins of about 5%, that would require an extra $1.717 million in food sales—a seemingly impossible feat.

The larger and more productive businesses become, the more they can pay their workers.

Take Amazon. The company announced in 2018 that it was raising its minimum wage to $15 per hour—a move that signals increased productivity and automation of low value-added jobs. It will almost certainly give Amazon an even greater advantage over its competitors.

But what works for Amazon doesn’t necessarily work for all the small businesses that employ 70% of workers in the U.S.

If Amazon had to pay a $15 minimum wage when it first set up shop 26 years ago, it may not even exist today. Businesses don’t start big, and if they don’t have room to grow, they won’t start at all.

The Faces of $15 website documents more than 150 businesses that—prior to COVID-19—had to lay off workers, reduce hours, increase prices, or shut their doors altogether due to minimum wage hikes.

With unemployment at 11.1% in June and likely to remain elevated for some time, minimum wage hikes are a recipe for disaster.

In a report titled “Labor Policy for COVID-19 and Beyond,” my co-authors and I recommend the exact opposite—scaling back or postponing scheduled minimum wage increases as a way to open up job and income opportunities and to minimize permanent business closures.

Prior to COVID-19, great strides had been made on this front: Between 2016 and 2019, the wages of workers at the 10th percentile of earners (those earning about $10 per hour) rose by 14.6%. That was more than the 10.2% wage gain for median workers over the same period, and also more than the 13.5% increase for workers at the 90th percentile of earnings.

Rising wages are universally advantageous when they come from market demand.

But the same is not true when higher wages come from government command.

But when wages rise because of government command, some workers’ gains come at the expense of others’ losses.

That’s because to stay in business with higher payroll costs, employers have to raise prices, cut back on investments, and eliminate jobs that don’t produce at least the minimum wage.

I’ve had jobs cleaning dishes, making pizzas, filing charts, and waiting tables. Those jobs were not worth $15 per hour, especially not in the small town I grew up in.

The Congressional Budget Office also concluded that a $15 minimum wage would reduce total family income, increase inflation (a 2017 Heritage Foundation study found that fast-food prices would rise between 24% and 38% under a $15 minimum wage), and expedite automation. It would also result in higher interest rates, more debt, and a smaller economy.

Instead of aiding the recovery, higher minimum wages would impose significant short- and long-term consequences.

When Seattle passed a $15 minimum wage, economists found that less experienced workers were pushed outside the city limits to find jobs or to supplement their reduced hours.

It’s one thing if Seattle or other large cities want to impose their own high minimum wages that reduce jobs for less experienced workers, but if the federal government does that on a national scale, many workers will have no place else to go.

Certain states, and towns, will be especially hard hit.

In Puerto Rico, where the median wage is $10.13, a $15 minimum wage would be equivalent to a $28 minimum wage across the states.

In addition to hurting many low-income workers, economists widely believe that minimum wage increases are not an effective way to reduce poverty.

That’s because most minimum wage workers do not live in households that are in poverty. It’s far more likely for minimum wage earners to be teenagers working part time while living at home than single parents supporting a family.

Only 0.25% of hourly workers ages 25 and older earn the federal minimum wage (hourly workers make up about 59% of all wage and salary workers). Another 1.1% earn below the minimum wage, presumably in combination with tips they receive.

Moreover, the earned income tax credit already increases a $7.25 wage to about $10 for workers with children.

There’s a better way to enable work opportunities and income gains for all Americans.

Now, more than ever, Americans need flexibility and open doors to income and work opportunities. Despite good intentions, high minimum wages end up hurting many of the people that they are trying to help.