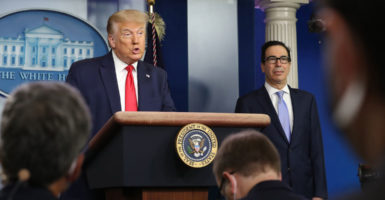 America's economy just added more jobs in two months than it did in the 46 months after the height of unemployment during the Great Recession. Pictured: President Donald Trump speaks to reporters about the latest numbers July 2 in the briefing room at the White House, flanked by Treasury Secretary Steven Mnuchin. (Photo: Chip Somodevilla/Getty Images)

For a second month in a row, the U.S. economy gained a record number of jobs.

Following job gains of 2.7 million in May, the economy added  4.8 million more jobs in June.

While unemployment is still high, the faster-than-expected turnaround and record gains show the resiliency of the American economy and prove that this is not another Great Recession.

The American economy just added more jobs in two months than it did in the 46 months after the height of unemployment during the Great Recession.

Amid the COVID-19 pandemic, Americans have shown their willingness and desire to return to work, to stores, to religious services, and to medical appointments.

Moreover, the report indicates that Americans are weaning off of federal supports such as Paycheck Protection Program loans, paid family leave, and unemployment insurance benefits.

As Congress returns from its July Fourth recess, one of lawmakers’ top priorities will be crafting a Phase 4 coronavirus recovery package.

As businesses are already reopening and Americans are returning to work, that package should not be another massive stimulus bill, but rather a highly targeted response, taking into account new information and data to fix past mistakes and to foster the recovery that’s already underway.

Not only is that unfair to essential workers who have remained on the job and unfair to taxpayers who will pay for those benefits, but it’s also unfair to lower-income workers to incentivize them (with up to thousands of dollars in additional income) to remain unemployed when doing so increases their risks of physical, mental, and long-term financial consequences.

And it has hurt the recovery by preventing some businesses from being able to reopen as soon as they would have liked because some workers would be taking a pay cut by going back to work.

Yet, liberal lawmakers passed a bill to extend the $600 bonus unemployment benefits through January 2021 (with possible extensions through March 2021).

The Congressional Budget Office said that doing so would reduce employment and output in 2021 and lead to more permanent business closures.

You cannot aid the recovery or help individuals and families by increasing unemployment.

That’s why Congress should replace the $600 bonus unemployment benefit with a temporary partial federal match to state benefits.

If Congress provided a 40% match to state-based benefits, someone who receives a 50% percent state benefit would end up with 70%, including the federal match. The match could decline by 10% per month through December 2021.

Such a match could also help workers who are able to find work, but with fewer hours and lower incomes than before, by boosting “short-time” or partial benefits in states that offer such programs.

As the CBO analysis of unemployment benefits explained of such proportional wage-based benefits:

[T]he effects on output and employment would probably be more positive, because a proportional benefit would not create especially weak incentives to work for people with low potential earnings.

While targeted unemployment supports can alleviate the symptoms of unemployment, the only cure is work opportunities.

Federal and state policymakers should seek to replace rigidity with flexibility and to help open doors to income and work opportunities for all Americans.

These are the types of policies that led to a 50-year record-low unemployment rate as recently as February, and they are the same policies that will help America return there.