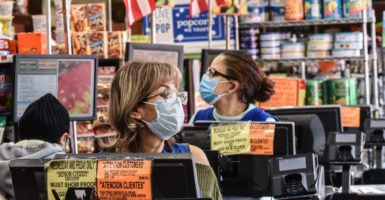 The new jobs report suggests that Americans are eager to return to work, after many were temporarily unemployed due to an effort to contain the COVID-19 pandemic. Pictured: Cashiers work in a grocery store in the Bushwick neighborhood of Brooklyn on April 2, 2020, in New York City. (Photo: Stephanie Keith/Getty Images)

Expert predictions were shattered again, as the Bureau of Labor Statistics reported that the economy added 4.8 million jobs and the unemployment rate fell by 2.2 percentage points to 11.1%.

The new jobs report suggests that Americans are eager to return to work, after many were temporarily unemployed due to an effort to contain the COVID-19 pandemic.

After this report, we have now added more jobs in the past two months than we did in the 46 months following the height of unemployment during the Great Recession.

While these numbers are strong, there is a lot of work still to be done in order to bring the sectors that lost significant jobs back to full strength.

Here are the sectors where we are seeing the biggest changes:

The number of people temporarily laid off decreased by 4.8 million in June to 10.6 million, which follows a decline of 2.7 million in May. This continues to show that job losses due to COVID-19 are intended to come back, once it is safe to open.

However, not all of the jobs that were lost are coming back. The report shows that while many job losses were temporary, permanent job loss increased by 588,000 to 2.9 million.

The civilian non-institutional population in the United States was 260,204,000 in June. This includes all people 16 and older who did not live in a prison, nursing home, or long-term care facility.

Of this population, 159,932,000 participated in the labor force, which means they either had a job or were actively seeking one during the last month. This resulted in a labor force participation rate of 61.5%, up from 60.8% in May.

The U-6 unemployment rate – which measures both the unemployed who are looking actively for a job and those who are unemployed but not actively seeking work—dipped from 21.2% in May to 18%.

It is expected that we will see a spike in employment as the economy reopens. The key is to make sure we set ourselves up for full recovery, but also lay a groundwork that allows us to grow even stronger.

We still have a long way to go before we regain what was lost, and as noted, there are many jobs that are permanently gone. It is likely that the longer the economy is partially closed, the harder it will be for employers to keep people employed.

But as America begins to safely reopen the economy, policymakers have the opportunity to help, not harm the recovery.

We have mentioned the problematic unemployment insurance bonuses of $600 that are hurting small businesses as they try to rehire workers who are making more from unemployment. Congress would be making a big mistake to extend this policy.  Unemployment should never pay more than work.

The nonpartisan Congressional Budget Office has said that extending this $600 bonus would reduce employment and output in 2021 and lead to more permanent business closures.

There is another way.

According to a recent report by Rachel Greszler at The Heritage Foundation, the federal government could work to help ease people off this bad incentive of paying people more to be unemployed than to work, by providing targeted unemployment support through a partial federal match of state unemployment insurance.

This would provide a targeted approach that encourages work, aids economic recovery, respects taxpayers, and is equitable at the same time. You can read the details of the plan here.

The June jobs report helps demonstrate how eager Americans are to reclaim their livelihoods, and return to work. Now, we read many news stories talking about states suspending economic activity due to a spike in COVID-19 cases.

While this will provide future challenges to economic recovery, it is important that we avoid adding to the challenge by continuing policies that will continue to hurt us.