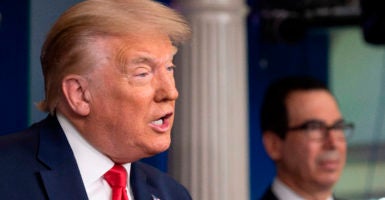 President Donald Trump, appearing Thursday with Treasury Secretary Steven Mnuchin, touts "the largest monthly jobs gain in the history of our country" during remarks in the briefing room of the White House. (Photo: Jim Watson/AFP/Getty Images)

President Donald Trump is touting the “spectacular” addition of 4.8 million new jobs in June and a drop in the unemployment rate to 11% as the economy continued to recover from the shock of the COVID-19 pandemic.

“This is not just luck, what is happening,” Trump told reporters Thursday morning in the White House briefing room. “This is a lot of talent.”

Celebrating the latest jobs report just before the Fourth of July weekend, the president added:

Trump called the government’s June numbers for employment the “largest monthly jobs gain in the history of our country.”

With massive job losses February through April as elected officials shut down much of the economy, the unemployment rate appeared to be edging close to 20%. But the economy added 2.7 million jobs in May (revised from the government’s original report of 2.5 million).

The unemployment rate in February—before the COVID-19 lockdown—was 3.5%. It rose to 4.4% in March, then skyrocketed to 14.7% in April, according to the Bureau of Labor Statistics.

The president’s prediction of a “V-shaped” economic recovery could be happening. However, new COVID-19 cases are surging throughout the Sun Belt states of California, Florida, Texas, and Arizona.

“We have some areas where we are putting out the flames of the fires, and that is working out well,” Trump said.

He later added of the pandemic: “We are otherwise getting it under control. Areas that were hard hit are doing very well. Some were doing very well and we thought [COVID-19 cases] may be gone and they flared up, and we are putting out the fires.”

Hailing “historic gains,” Trump said some sectors of the economy hardest hit by the pandemic had the strongest comeback, and read some of the numbers from the lectern.

In June, 2.1 million jobs came back to the leisure and hospitality industry, and 740,000 jobs to the retail industry.

“Manufacturing looks like it is ready to really take off at a level that it has never been before,” Trump said. “A lot of that has to do with our trade policy, because we are bringing manufacturing  back to our country.”

With regard to the nation’s demographics, Trump said that, “really happily for me,” African Americans again made historic gains with 404,000 jobs added last month.

“If you add the two months together, it’s 700,000 jobs for African American workers added in the last two months. That’s a record by a lot,” Trump said of May and June.

Hispanic employment is up by 1.5 million jobs, and 3 million more women were employed in June.

“Workers with a high school education or less made the biggest strides of all,” the president said.