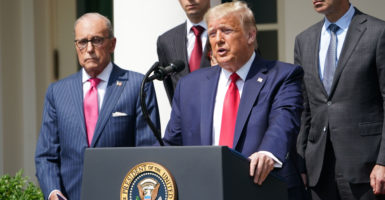 Flanked by Larry Kudlow, the director of the National Economic Council, President Donald Trump holds a press conference on the economy on Friday in the Rose Garden. The U.S. economy regained 2.5 million jobs in May as coronavirus pandemic shutdowns began to ease, the Labor Department reported. (Photo: Mandel Ngan/AFP/Getty Images)

President Donald Trump touted a nascent economic comeback Friday, as a resurgence of 2.5 million jobs were added in May, marking what could be a turnaround from the economic hemorrhaging caused by the COVID-19 shutdown.

“We’ve been talking about a ‘V.’ This is far better than a ‘V.’ This is a rocket ship,” Trump said in the Rose Garden, surrounded by members of his administration.

The “V” was a reference to an economy that could bounce back to where it was before the nationwide quarantine and accompanying economic free fall, as opposed to a “U”-shaped recovery, where it would take the economy longer to fully come back, or an “L”-shaped recovery, in which the economy would not recover for an extended period of time.

The nation’s unemployment rate is still at 13.3%, about 10 percentage points higher than the February rate before the lockdowns. But it’s down from 14.7%, after wide speculation the jobless numbers could hit 20%.

Trump said the best is yet to come, because many states—including California and New York, which represent a huge part of the nation’s economy—remain closed. He stressed the economy was rebounding despite the “China plague,” referring to the coronavirus pandemic that originated in Wuhan, China.

“This was an important day, because this shows what we’ve been doing is right,” the president said. “The reason it’s been and is so good is because the body was strong. Our body was so powerful that we could actually close our country, save millions of lives, stop people very early on from China from coming in.”

Trump said the country is moving forward on developing a vaccine for the coronavirus and credited the states of Florida and Georgia for reopening relatively quickly, while encouraging more states to do the same.

“It’s extremely important to remember that many of our states are closed or almost closed,” he said. “Some of the big ones, New York, New Jersey, they’ll start. They’re starting now to get open, I hope.”

As he was signing the new legislation, a reporter noted that unemployment increased 0.1% for African Americans and by 0.5% for Asian Americans.

The president briefly addressed the unrest in the streets across the nation arising from the death of George Floyd, the black man who died in police custody on May 25, setting off ongoing demonstrations and rioting.

Invoking Floyd, the president stressed that an economic comeback is good news for the entire country.

“Hopefully, George is looking down right now and saying, ‘There’s a great thing happening for our country,’” he said.

Employment soared in the leisure and hospitality industries by 1.2 million jobs, the White House said. That was a sector among the hardest hit as people were homebound by the COVID-19 pandemic lockdown. The construction industry added 464,000 jobs. Education and health services added 424,000, the retail trade added 368,000, and manufacturing added 225,000 jobs.

There were 15.3 million people on temporary layoff in May, in addition to almost 5 million people who had temporarily lost their jobs, but were counted as employed but “not at work for other reasons,” according to the White House breakdown of the Labor Department’s numbers.

The expectation is that as more states reopen, the trend will continue that laid-off workers will get their jobs back.

The number of Americans moving from “not employed” to “not in the labor force” actually remained about the same, at 4.4 million from April to May, in line with the average 12 months before March, according to the White House.

Average weekly work hours increased for private sector employees by 0.5% to 34.7 hours—which is the highest level since 2006. Further, 73% of small businesses are now open again, which is up from the pandemic low of 52%.

“The only thing that can stop us is bad policy,” Trump said. “Frankly, left-wing, bad policy of raising taxes and Green New Deals.”