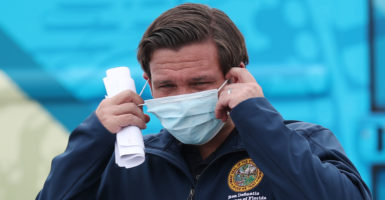 New York has almost 30 times as many coronavirus-related deaths as Florida. Pictured: Florida Gov. Ron DeSantis, a Republican, removes a mask before speaking during a press conference May 6 at the Hard Rock Stadium testing site in Miami Gardens. (Photo: Joe Raedle/Getty Images)

Florida and New York are states with similar population sizes, but dramatically different approaches to the COVID-19 pandemic.

New York has almost 30 times as many coronavirus-related deaths as Florida, with a heavy concentration among senior citizens, according to numbers from the Centers for Disease Control and Prevention.

New York Gov. Andrew Cuomo, a Democrat, gained praise in the media for his performance in press conferences if nothing else, while Florida Gov. Ron DeSantis, a Republican, has been heavily criticized in media reports.

The population of New York state is 19.5 million, while Florida is home to 21.5 million.

“Gov. DeSantis understands Florida and knows how to interpret data and use science to guide the state during this health care pandemic,” the governor’s communications director, Helen Aguirre Ferre, told The Daily Signal in an email. “He worked quickly to protect the vulnerable, increase testing, promote social distancing, support hospitals and protect health care workers, and prevent introduction [of the virus] from outside of the state.”

He established COVID-19 dedicated nursing homes. In addition, he required comprehensive screening of staff and vendors entering these long-term care facilities. Testing and contact tracing was a priority for all Florida residents in addition to providing precious PPE [personal protective equipment]. Impeding those who were fleeing from other states where there was community spread of this virus was also important.

In New York, senior Cuomo administration officials contend that the federal government was too slow to ban European flights that primarily stop at major airports in New York or New Jersey.

From January through March, about 13,000 flights came through these airports from European locations carrying about 2 million passengers, the officials told The Daily Signal on background.

New York also does more testing for the coronavirus than other states, which is one reason the recorded rates are higher, they said. Add to that, New York City has the most dense population in the United States.

New York and Florida have a similar percentage of total COVID-19 deaths among those 65 and older. Seniors made up 83% of deaths in Florida, 77% in New York.

“In general, on a statewide basis, Florida is doing much better than New York,” Norbert Michel, director of the Center for Data Analysis at The Heritage Foundation, told The Daily Signal. “Florida has much fewer deaths and deaths per capita and per 100,000 than New York; this fact holds even if you remove New York City from the state data, though the differences are much smaller.”

The high fatality rate in New York City from the coronavirus skews the statewide numbers, he said.

Cuomo also has faced criticism for a March decision, later reversed, to send patients back to nursing homes after they tested positive for COVID-19.

“Florida and New York had very different protections for nursing home patients,” Michel said. “The nursing home policy [in New York] was insane. The state was basically sending someone to an early grave. … If it is the case that the infection was already widespread before anyone knew about it, the state was still literally sending people back into it.”

To help free up beds in hospitals in late March, the New York state Health Department issued an order to nursing homes: “No resident shall be denied re-admission or admission to the [nursing home] solely based on a confirmed or suspected diagnosis of COVID-19.”

Similarly, the American Medical Directors Association, in a March 26 statement, said: “Unsafe transfers will increase the risk of transmission in post-acute and long-term care facilities, which will ultimately only serve to increase the return flow back to hospitals, overwhelming capacity, endangering more healthcare personnel, and escalating the death rate.”

Cuomo administration officials said residents returning to nursing homes after testing positive for the virus were quarantined from other residents, following federal guidelines for them to be kept in separate facilities with different caretakers from the rest of the population. A total of 12% of the state’s fatalities were from nursing homes, a Cuomo administration official said.

“It was one of the giant red herrings of all time,” the official told The Daily Signal. “I would take our state law over any state law that says you can discriminate [against] potentially the most feeble, at-risk, vulnerable people in our society.”

In early May, The New York Times reported that 1,600 previously undisclosed deaths occurred in New York nursing homes, bringing the total number of deaths at nursing homes to almost 5,000.

One more factor: Cuomo didn’t order the New York City subway to be sterilized on a nightly basis until early May, even though the first COVID-19 cases were reported March 1.

New York is unique among U.S. cities in having a subway that operates around the clock; closing it was not an option. As more people stayed home more often, however, it was feasible to close down for nightly sterilization beginning May 5, the official said.

Although New York City has more people living in close proximity than any other American city, specific policies played a role in the death toll for both the city and state, said Arpit Gupta, an adjunct fellow at the Manhattan Institute who co-authored a report with recommendations for reopening New York City.

“I would point to large, dense cities in Asia such as Seoul, Taipei, Tokyo, and in Hong Kong,” Gupta told The Daily Signal. “Density is not destiny. Those cities made policy decisions that New York didn’t that have contributed to the death toll we’ve seen.”