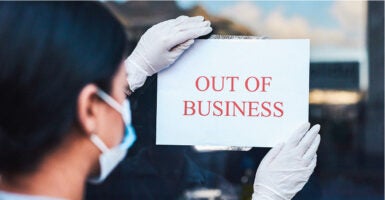 With a $15 federal minimum wage, any jobs that don’t produce at least $36,000 per year in goods and services will eventually be eliminated—either because businesses close their doors, outsource their labor, or automate low-skilled jobs. (Photo: Moyo Studio/Getty Images)

President Joe Biden has proposed a nationwide $15 minimum wage as part of his so-called “American Rescue Plan.” Talk about bad timing: Raising labor prices on businesses that are struggling to stay afloat is like throwing them a load of bricks instead of a life preserver.

State and local governments raising their minimum wages is one thing, but to more than double the federal minimum, from $7.25 to $15 per hour?

Nearly one in every five restaurants permanently closed their doors in 2020 as 30 large retail and restaurant companies filed for bankruptcy.

Although very few people—only about 1% of all workers and 0.1% of single parents—make the $7.25 minimum wage, a good portion of restaurant, retail, and hotel jobs pay less than $15 per hour.

No one would suggest raising the rent on households who are months behind on their payments, so how could raising labor prices help businesses?

For a restaurant with five full-time workers making minimum wage, a doubling of the federal minimum wage would mean an extra $85,800 in wages and employment taxes. With restaurant profit margins of about 5%, that could require an extra $1.7 million in food sales ($4,700 more per day)—a seemingly impossible feat in normal times, let alone in the middle of a global pandemic.

Higher wages are a great thing—especially when the gains accrue to lower-income workers. But the only way to achieve actual wage increases—that is, lasting wage increases that don’t take jobs and incomes from others—is for workers to become more productive.

To that end, government mandates are powerless. A $15 minimum wage won’t help workers gain education and experience or provide them with technology that will enable them to produce more value and earn larger incomes. In fact, it could cause the opposite, by shifting employers’ resources away from training and investments to wages instead.

Moreover, raising wages by government fiat hurts many workers in the short and long run by cutting off the bottom rungs of the career ladder.

A $15 federal minimum wage translates into over $36,000 per year in wages and mandated taxes and benefits paid by employers. That means that any jobs that don’t produce at least $36,000 per year in goods and services will eventually be eliminated—either because businesses close their doors, outsource their labor, or automate low-skilled jobs.

That’s why even liberal economists and the nonpartisan Congressional Budget Office caution that a $15 federal minimum wage would lead to a survival-of-the-fittest labor market, reduce future incomes, and disproportionately harm African Americans and women.

The former chair of President Barack Obama’s White House Council of Economic Advisers, Alan Krueger, warned in 2015, “Research suggests that a minimum wage set as high as $12 an hour will do more good than harm for low-wage workers, but a $15-an-hour national minimum wage would put us in uncharted waters, and risk undesirable and unintended consequences.”

Those consequences would be unequal across the country. Large cities with high costs of living—many of which already have or are on the path to a $15 minimum wage—may not experience huge consequences. But non-urban areas and places with lower costs of living could be devastated.

Imagine if policymakers were proposing a minimum wage hike to nearly $36—ensuring that all full-time workers earned at least $74,000 per year.

Most people would say that’s too much, realizing that such a high minimum wage would have massive consequences in terms of lost jobs, increased prices, and a complete and utter disruption of the American labor market and economy.

Yet, $15 per hour in Mississippi would be equivalent to $35.74 per hour in D.C., where federal lawmakers seek to impose a national standard across the U.S.

Minimum wages are best left to local governments, where decisions can be made based on economic conditions and the cost of living.

If a local government sets its minimum wage above the market wage, at least workers and business owners who lose their jobs and businesses can move to places where it’s still possible for them to earn a living.

But if policymakers impose an excessively high nationwide minimum wage across 50 very diverse states and more than 3,000 counties, there will be nowhere else for the harmed to go.

Instead of mandating policies that irrefutably harm some people to the benefit of others, policymakers should focus on opening doors to income opportunities for all workers.

Reducing barriers to jobs and income gains is what helped contribute to the 14.6% increase in wages for workers at the 10th percentile of earners (those earning about $10 per hour) between 2016 and 2019.

Lawmakers at all levels should be seeking to help Americans recover and gain new opportunities instead of permanently wiping out existing ones.