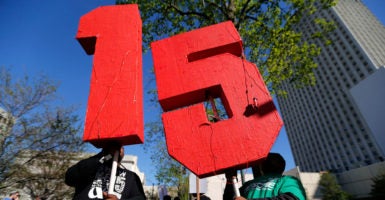 Activists hold giant numbers as part of a demonstration for a $15 minimum wage on April 4, 2017, in Memphis, Tennessee. (Photo: Mike Brown/Getty Images)

House Democrats are poised to pass a $15 minimum wage this week—a policy that’s become more and more mainstream within the Democratic Party. But would it actually help workers? What effect would it have on the economy? And what effect has it already had in places where it’s been tried? We ask those questions and more in today’s conversation with Rachel Greszler, a labor expert at The Heritage Foundation. Plus: The Netflix series “13 Reasons Why” removes a controversial scene depicting teen suicide. We discuss.