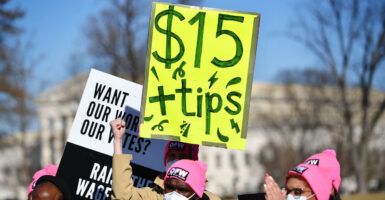 The Biden administration has issued an executive order requiring a $15 minimum wage for all federal workers and federal contractors. Photo: Activists demonstrate at the House Triangle of the U.S. Capitol in Washington, D.C., on Feb. 8. (Photo: Mandel Ngan/AFP/Getty Images)

Unable to force a $15 federal minimum wage across the entire country, the Biden administration issued an executive order, now implemented, requiring a $15 minimum wage for all federal workers and federal contractors.

While the federal government can avoid some of the harmful effects of wage-setting by politicians, this executive order may provide a temporary—though limited—dose of economic reality.

At least within the current fiscal year, federal agencies’ budgets are limited by what Congress has allocated to them. Thus, having to pay certain workers more to do the exact same thing will force agencies to make some of the same decisions that businesses have to confront when policymakers set minimum wages above market wages.

The natural response of employers to government-imposed minimum wage hikes is to lay off workers or to shift the composition of their workforce to eliminate lower-skilled labor. Employers also respond by reducing or eliminating benefits like health insurance and retirement contributions and taking away scheduling flexibility.

But most of those things aren’t options for federal agencies. For starters, it takes about a year-and-a-half to fire a federal worker, and the convoluted and painstaking process takes so much time and effort on the part of managers that most have determined it’s not worth the effort—even if it does result in deadweight and adverse workers keeping their jobs.

Moreover, federal agencies have very little control over salary and benefits, and federal unions staunchly oppose anything that might result in less flexibility for federal workers.

Thus, federal departments are likely to have to cut back on services and on needed modernizations. In particular, this will most directly impact the Department of Defense and defense contractors.

The Office of Personnel Management estimates that 84% of the required wage hikes will fall on the Department of Defense, which will alone have to raise pay (and pay-related benefits and taxes) for 56,000 employees. This will further squeeze the Department’s ability to maintain readiness, on top of the automatic 2.7% pay raise for military personnel that requires about $1.4 billion more in personnel costs in 2022.

Various studies estimate that federal workers receive between 20% to 60% higher compensation than their private sector counterparts. The differences are most profound among lower-wage positions.

The Congressional Budget Office estimated that federal workers with no more than a high school diploma receive 34% higher wages and 93% higher benefits than their private-sector counterparts.

A $15 minimum wage translates into a minimum of $44,800, and up to $55,000 in annual compensation for federal workers (including employer payroll taxes, and employer health and retirement benefits).

Factoring in federal workers’ generous paid leave, that translates into a taxpayer cost of about $25 to $31 per hour for federal employees with base salaries equal to $15 per hour.

On the other hand, paying people more do to the exact same thing leads to inflation. That’s evidenced today as 5.7% wage gains (year-over-year) are equal to 1.7% wage losses after taking into account inflation, which is at the highest level in four decades.

Basing pay on anything other than productivity is not only bad for business, it’s also bad for employee morale.

According to the 2012 to 2016 Federal Employee Viewpoint Surveys, only 21% of federal workers said that pay raises depend on how well people do their jobs, and only a third believed that promotions are based on merit.

The burden of President Joe Biden’s executive order mandating $15 per hour for federal employees and federal contractors will eventually be borne by taxpayers, but its consequences will also spill over to workers, employers, and consumers across the country.

Government policies—ostensibly linked to COVID-19—already incentivize people not to work. Now raises for federal employees will make it even more challenging and expensive to fill low-skilled job positions.

The current labor shortage—with 10.9 million job openings—is unprecedented. Nearly half of all employers are struggling with unfilled job openings. And the overwhelming majority of employers are having to increase compensation. The federal government further driving up the cost of labor will exacerbate employers’ struggles and the already four-decade-high inflation.

If the president wants to help workers achieve real, lasting wage gains that aren’t eaten away by inflation, he should remove government-created barriers to higher wages, eliminate needless regulations that cost employers money that could otherwise go to workers, open more doors to flexible and independent work opportunities, and make it easier for employees to pursue alternative and low-cost education options such as apprenticeships.