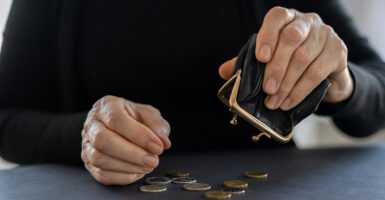 We’ve seen the largest increase in inflation in 40 years—much of it driven by poor government policy. There are solutions to fighting it, if Washington is willing. (Photo: Getty Images)

Inflation rose 7% over the past 12 months, making it the largest increase in 40 years. Much of this inflation, which has been driven by poor government policy, could be alleviated if Washington was willing to make a series of better policy choices. But the stakes are high if our leaders fail to act.

The Federal Reserve recently abandoned its “transitory” inflation language as there’s now concern that high inflation could persist. That concern is real, and in many ways is dependent on the federal government’s response.

Having already stimulated greater demand for goods and services with $5.5 trillion in so-called COVID-19 spending while simultaneously restricting the labor supply through welfare-without-work policies and COVID-19 unemployment benefits that discouraged a return to work, the Biden administration and progressive lawmakers are pursuing more of the same. Their big-government socialism Build Back Better Act, increased regulations, and command-economy tactics would all exacerbate inflation.

There are better solutions to fight inflation instead of drive it.

A new report from The Heritage Foundation examines how government policies on labor, energy, food, housing, and trade are contributing to inflation prices and offers solutions to alleviate it.

Labor. Since labor accounts for 60% of the cost of goods and services, the current labor shortage is driving price increases. The shortage began with bad government policy that caused employers to have to compete with the government to attract the workers they needed. The $600/week bonus unemployment insurance benefit meant that two-thirds of unemployed workers made more money staying on the sidelines than returning to work.

With 10.6 million job openings in November—1.6 jobs for every unemployed worker—businesses have never had a harder time finding workers. According to the National Federation of Independent Businesses, a record-high 49% of businesses said they were unable to fill open positions in December (more than twice the historical average of 23%), and 95% of companies seeking workers reported few or no qualified job applicants.

When the demand for workers exceeds the supply, employers have to increase compensation. But paying people more money to do the exact same thing requires raising prices. While the 4.7% hourly earnings increase that has come alongside increased worker demand is about twice the historical average, workers’ purchasing power has actually declined because rising prices have impacted their wallets, too. Inflation-adjusted hourly earnings were down 2.4% in 2021.

Record-high quits are also contributing to employer struggles and rising costs. Over the past four months, an average of 4.3 million workers quit their jobs each month. That translates to employers replacing 1 out of 3 workers over the course of a year. And that’s really expensive, costing an estimated six to nine months of salary to replace each worker, which feeds into even higher prices.

Housing. Housing is Americans’ biggest expense, so the 19.5% increase in home prices and 15% increase in rent over the past 12 months is squeezing Americans’ budgets. Factors like the Federal Reserve driving down mortgage rates by purchasing $1.2 trillion in mortgage-backed securities and subsidized home purchases by government schemes like Fannie Mae have thrust more money into the home-buying market, fueling demand and raising home prices. At the same time, state and local restrictions and the unlawful federal eviction moratorium drove rising rents up even further.

Energy. Energy is essential to nearly every good and service Americans consume—from schools to hospitals, grocery stores to manufacturing, to the homes we live in and the cars we drive. Energy is also a key component of living happier, healthier, and more productive lives. So, when home heating costs increase by 20% to 90% this winter versus last and crude oil prices are up over 50% from a year ago,that directly hurts Americans.

Existing bad energy policies are imposing unnecessary costs, and the Biden administration is proposing to double down with policies to impose even more cost increases. The administration’s canceling of the Keystone XL pipeline is just one of many examples.

Food. The 6.3% year-over-year growth in December in food prices was the largest 12-month increase in over 13 years. The administration’s witch hunts against companies forced to raise prices because of market forces and harmful government intervention will only get in the way of American farmers, ranchers, truckers, and others who produce and distribute food at low cost to Americans. Harmful interventions include proposals that seek to centrally plan America’s food system around ideological goals such as climate change.

Tariffs. Tariffs on things like vehicles, aluminum, steel, appliances, and shipping chassis used to transport cargo containers are needlessly adding to the prices consumers pay for goods. Policymakers can directly reduce prices by removing these tariffs.

The past year has shown that spending massive amounts of taxpayers’ money and attempting to micromanage the economy are a cause of—not the solution to—rising inflation.

The current administration and Congress would do well to heed the advice of Jimmy Carter, who, after years of presiding over high inflation, eventually came up with logical plan to reduce it. He called for restricting federal spending and reducing the budget deficit, cutting the federal workforce and eliminating government waste, and getting rid of needless regulations and bringing back more competition to the American economy.