Fact Check: Was Biden Right About Federal Unemployment Benefits Having No Effect on Jobs Report? 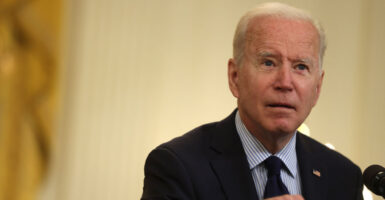 The $1.9 trillion, partisan COVID-19 relief package was supposed to boost the economy, but it may have stifled it instead.

With widespread reopenings, 46% of Americans having received at least one COVID-19 vaccine, and another round of “stimulus” checks boosting Americans’ bank accounts, expectations were high for job gains to exceed 1 million in April.

Yet, employment growth fizzled, with only 266,000 jobs added, and the unemployment rate ticked up to 6.1%.

When asked if the easily accessible federal unemployment benefits—including a $300 bonus on top of state benefits—had any impact on the weak jobs report, President Joe Biden replied, “No, nothing measurable.”

While the jobs report data isn’t structured to specifically detect whether or not workers are turning down job opportunities because of expanded unemployment benefits, another set of data—the Job Openings and Labor Turnover Survey, or JOLTS—provides a compelling case that federal unemployment benefits are hurting the economy.

There are now 2.8 million more job openings now than there were the last time the economy had a similar 6.1% unemployment rate (in 2014).

With the strong demand for more workers, employers are also laying off fewer of their current employees. The data showed yet another record, with only 1.5 million layoffs or separations in March, marking the lowest level on record.

High unemployment alongside high job openings, high quits, and low layoffs is counterintuitive, and indicates an external variable must be at play.

That external variable is almost certainly the federal unemployment benefit.

The demand for a strong recovery is high, as indicated by a record-high of 8.1 million job openings and a $2.2 trillion increase in personal savings over the past year. But the supply of workers needed to fuel the recovery is weak.

Although the Bureau of Labor Statistics doesn’t directly ask employers if generous federal unemployment benefits are causing a shortage in the supply of workers, anecdotal evidence builds a compelling case.

Customers at restaurants are seeing signs apologizing for longer waits due to short staff—some even directly faulting the federal unemployment benefits.

It’s not just restaurants facing workforce shortages, however. An upstate New York dairy farmer I spoke with said his biggest challenge since the pandemic has been recruiting enough workers. He’s offering $22 per hour, and workers are turning it down because unemployment benefits are more appealing.

Even the freelancers and contractors can be harder to come by as the expanded benefits allow these workers to collect benefits if they work less than before. This expansion in benefits to freelance workers who don’t pay into the system is part of the reason that there were 16.7 million total unemployment insurance claims compared to 9.8 million unemployed workers in April.

Both the data and on-the-ground reports show that federal unemployment benefits are hurting the recovery.

Some governors are taking action now to help small businesses and to promote a stronger recovery by ending the federal unemployment bonus payments. Just since last week, the governors of Montana, South Carolina, and Arkansas have all announced that their states will no longer be delivering the $300 bonus payments beginning in June.

Governors that want to show employers they are open for business and also minimize the consequences of excessive unemployment—such as reduced economic output, increased taxpayer costs, and worse future well-being for the long-term unemployed—should end the federal unemployment insurance bonuses.

Instead, they should focus on allowing society to safely resume activities. This is the best way to ensure a healthy amount of job opportunities—and people able and interested in taking advantage of them.