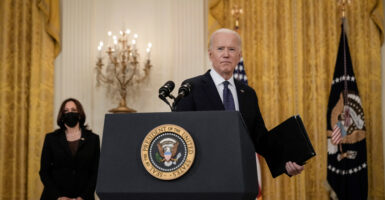 The latest national employment numbers were released on Friday. Expectations were high.

A combination of vaccinations, relaxing of pandemic-related economic restrictions, and stimulus funding that passed in March were enough to have experts predicting 1 million new jobs in April.

The reality was quite different—just 266,000 new jobs in April, the biggest underperformance in memory, and an unemployment rate increase to 6.1%.

Placed in context with what employers are reporting about labor shortages, the jobs report is a stinging rebuke of President Joe Biden’s endless stimulus spending spree. Democrats touted the deeply flawed $1.9 trillion “COVID-19 relief” spending package as necessary to help the post-pandemic recovery.

The unemployment bonus means that tens of millions of workers can receive more money being on the dole than by being employed.

When we consider the latest figure of 7.4 million job openings across the country, along with widespread stories about companies desperately looking for workers and even paying people to interview, it’s clear that federal policy shouldn’t be encouraging people to remain unemployed.

Able-bodied workers choosing to stay home causes a variety of harms. First, it’s a waste of tax dollars. Second, it’s a waste of the productivity that the workers would contribute to the economy. Most importantly, it reduces the workers’ well-being, because long-term unemployment is tied to long-term reductions in income and health.

Another factor behind stubbornly high unemployment is parents who have to stay home with their children due to ongoing school closures.

In December, a bipartisan majority in Congress passed $77 billion to help schools and universities with reopening costs. Yet, Democrats insisted on an additional $170 billion in March, even though schools were struggling to spend the initial funds, teachers were given priority access to vaccines, and children are at low risk from COVID-19.

Sadly, all that extra money didn’t bring an end to politically driven school closures, as teachers unions have used their clout in many urban areas to ensure full reopenings wait until fall.

We’ve since discovered that the American Federation of Teachers leaned on the Centers for Disease Control and Prevention to produce overly cautious reopening guidance.

It can’t be emphasized enough that the “COVID-19 relief” package was a very expensive failure. Even as vaccinations (single-greatest recovery mechanism) were already well underway, liberal politicians insisted on ramming through a fourth so-called recovery package at an additional cost of more than $14,700 per household.

That added to the already dangerously high national debt for the sake of these dismal results (and bailouts for favored groups on the left).

All of that follows the similarly expensive failure of stimulus spending under President Barack Obama during the Great Recession.

Rather than recognizing that economic recovery depends on workers and investment in the private sector, the Biden administration and its allies are tripling down on a tax-and-spend vision.

The so-called infrastructure plan would hike taxes on businesses by $2.75 trillion to pay for a grab bag of corporate welfare, big subsidies for transportation modes like transit and Amtrak that most people don’t use, tax write-offs for the wealthy to buy electric vehicles, and expanding federal power despite Congress being incapable of managing the government we already have.

Promised jobs from infrastructure work would come up short, while the tax hikes would kill jobs across the economy by discouraging business investment, meaning the plan would be counterproductive.

Fortunately, there’s still time to stop the big-government agenda from derailing the recovery.

Other state governments should follow the example of states such as South Carolina by declining the unemployment payment bonus, which would encourage people to return to work. In that vein, Congress should end the bonus payments prior to their expiration in September.

Rather than approving the self-defeating Biden agenda, Congress and states should work on getting government out of the way by further reforming the tax code, cutting red tape, and putting our finances in order.

By encouraging work and investment, rather than dependence and bigger government, legislators can help America’s economy return to the strong wage growth and low unemployment that we enjoyed before the pandemic.