5 Charts Show Why Congress Must Stop Adding to National Debt 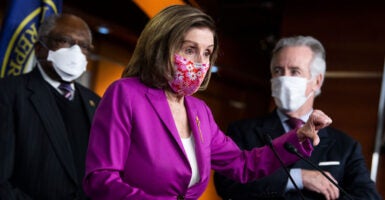 An enormous “stimulus” package was signed into law on Thursday, which is expected to bring government spending for this year to $6.9 trillion. This will add dramatically add to the national debt, which is currently at $28 trillion. Pictured: Speaker of the House Nancy Pelosi, D-Calif., conducts a news conference on the on the stimulus bill on Tuesday. (Photo: Tom Williams/CQ-Roll Call, Inc./Getty Images)

President Joe Biden signed into law an enormous, debt-financed “stimulus” package on Thursday. This was the final step in a multi-month process to pass a heavily flawed piece of legislation.

We might be tempted to hope that this will finally sate the left’s appetite for big government. After all, the size and scope of government will expand more than 54%—from $4.5 trillion of annual spending in 2019 to about $6.9 trillion this year—once the new spending bill is factored in, based on calculations by experts at The Heritage Foundation.

Washington added $4.5 trillion to the national debt over the last year alone. This brings the total debt level to $28 trillion, or roughly $225,000 per U.S. household.

Unfortunately, even that might not be enough to get congressional leaders and the Biden administration to pump the brakes on the spending spree. A planned infrastructure spending package could top $2 trillion, and there is little appetite to pay for it.

There are plenty of reasons why Congress should avoid another bloated spending deal. The nonpartisan Congressional Budget Office issued a report last week detailing one of the most important reasons: our nation’s finances are rapidly heading into dangerous territory.

While the numbers involved can seem incomprehensibly large, these charts can help to visualize the looming disaster.

The federal government amassed a record-setting amount of debt during the Great Depression and World War II. When the war was over, federal spending was adjusted from 41% of the economy in 1945 to 11.4% in 1948.

A combination of lower spending and rapid revenue increases from the post-war economic boom meant that the national debt shrank dramatically relative to the economy.

Unfortunately, such rapid debt reduction would be almost impossible to duplicate today.

Even the most optimistic growth forecasts fall well short of what was seen after World War II. More importantly, because most federal spending goes towards established benefit programs like Social Security and Medicare, it would be extremely difficult to cut spending at a similar pace.

However, policies to boost economic growth and restrain spending are still the best way to prevent the national debt from reaching crisis proportions.

In 2020, the federal government spent almost twice as much as it took in from taxes. The new legislative package means that this year’s deficit will likely be even bigger than last year’s.

These sky-high deficits add to an even larger total debt.

Uncle Sam has benefitted from a run of low interest rates over the last several years, blunting the cost of the escalating debt. Yet we can’t assume that this will last forever.

If you went to a bank for a big loan, you would expect them to ask some tough questions about your finances. The same holds true for the global financial system, which we count on to buy our debt.

While short-term federal bonds are still considered a safe investment, markets are demanding much higher yields for longer-term debt. Credit rating agencies have recently warned that our credit rating could be downgraded unless steps are taken to address overspending and the debt.

They have also cautioned us that interest rates will rise. This signals that our days of cheap credit could be coming to an end sooner than we would want. If that happens, America will pay a steep price.

That “steep price” is not metaphorical. The Congressional Budget Office’s new report shows that the cost of servicing the national debt was already set to explode before the stimulus package passed.

Right now, interest on the debt is a burden the economy can handle. However, even a modest interest rate increase—coupled with continued irresponsibility from Washington—will cause interest costs to increase more than five-fold in the next few decades.

This would be an anchor around the neck for the economy, and would make the growth and prosperity we take for granted next to impossible for future generations to experience.

In the not-so-distant past—specifically, the year 2018—the amount of public debt per person was just under $50,000. Today, it stands at nearly $67,000 for every American, including children.

Those numbers do not account for the new stimulus bill, a potential infrastructure package, or expanded benefit programs. Instead, the main reason why debt will skyrocket over the coming years is because federal spending is being allowed to grow without limits.

While some on the left blame the 2017 tax cuts for deficits, this chart makes it clear that the culprit for our long-term financial gap is an explosion in federal spending.

Spending was already above the historical average in 2019, and will grow much faster than the economy from 2022 onwards. Meanwhile, revenue will soon return to normal levels.

Why do we expect such a rapid increase in federal spending? A handful of programs, primarily Social Security, Medicare, and Medicaid, have been set up in an unsustainable way. Reforming these programs by balancing the needs of both retirees and future generations would be a tremendous breakthrough.

However, Congress has consistently avoided the issue of unsustainable programs, and has even made things worse by expanding benefits. The longer Washington waits to confront this problem, the more drastic the remedies will have to be.

Experts from The Heritage Foundation have provided legislators with the policy tools they need to address this mounting crisis, meaning members of Congress can’t plead ignorance.

Those in positions of leadership have a responsibility to do the right thing for present and future Americans, and the public must hold them accountable if they do not.