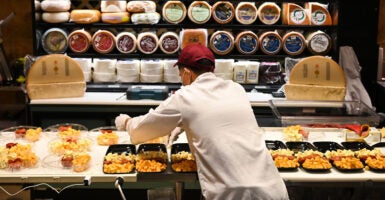 The latest job numbers show that the easing of lockdown restrictions has helped ease the employment struggles of many workers and families. Pictured: An employee prepares cheese at the cheese Dec. 29 inside Uncle Giuseppe’s Marketplace in North Babylon, New York. (Photo: Steve Pfost/Newsday/Getty Images)

The latest employment report shows gradual but welcome improvements, with 379,000 jobs added to the economy and the unemployment rate edging down to 6.2%.

The easing of lockdown restrictions in many areas of the country, along with more children having the option to attend school in person, has helped ease the employment struggles of many workers and families.

The number of people who were forced by the pandemic to withdraw from the labor force altogether declined by 500,000 in February (from 4.7 million in January to 4.2 million), according to the jobs report released Friday. The number reporting they had been unable to work at some point because their employer closed or lost business due to the pandemic dropped by 1.5 million (from 14.8 million in January to 13.3 million).

With the pace of vaccinations expanding, and areas of the country that have allowed safe reopenings having rebounded, employment gains will hopefully increase more substantially over the coming months.

Continued improvement, along with a likely expedited pace of recovery, suggest that Congress should not further expand unemployment insurance benefits with an additional $300 or $400 per week, nor extend those benefits six or seven months into the future when it’s unknown if such benefits will be necessary or helpful.

The most recent available data shows that in December, the 10 states with the fewest restrictions in place averaged 4.7% unemployment while those that have the most restrictions in place averaged 7.1% unemployment. Expand those figures nationwide, and that’s a difference of potentially 3.8 million people who might have jobs instead of being jobless.

Now, Congress is poised to reward states that imposed unnecessary shutdowns and pushed people into unemployment by giving them the lion’s share of a completely unnecessary and outrageously high $500 billion of federal funds.

Researchers at the New York Federal Reserve estimated that the unprecedented expansion in the duration of unemployment benefits (up to 99 weeks) during the Great Recession reduced employment by 4.6 million jobs in 2010 and by 3.3 million in 2011.

Unprecedented benefit levels accompanied by very limited checks on eligibility under the Pandemic Unemployment Assistance program have caused a level of fraud and abuse unlike anything states have experienced before.

Washington state uncovered a $650 million fraud scheme this past summer, while Maryland found a “massive, sophisticated, criminal enterprise,” resulting in over $500 million of fraudulent claims.

Even as states have gotten better at detecting fraud, the heightened benefit levels and loose eligibility requirements are incredibly problematic. Maryland has detected more than 290,000 fraudulent unemployment insurance claims in January and February alone, with the Maryland Reporter estimating that over half of all the unemployment claims filed in Maryland this year have been fraudulent.

The Office of the Inspector General at the U.S. Department of Labor estimated that if the unemployment insurance systems experienced the same level of improper payments as usual, taxpayers would have already lost $63 billion in improper payments, but the unprecedented level of fraud suggests that the true losses are much higher.

Now is not the time to further the incentive for fraud by boosting the federal unemployment bonus to $400 per week and extending it until September.

Nor should federal lawmakers reward states that unnecessarily restrict the livelihoods of their citizens.

Instead, federal lawmakers should provide targeted relief addressed at the public health crisis and encourage state and local lawmakers to allow society to safely resume most activities, to respect individuals’ rights to earn a living, and provide the option of in-person education for children.